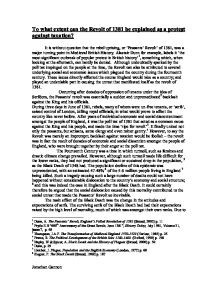 To what extent can the Revolt of 1381 be explained as a protest against taxation?

To what extent can the Revolt of 1381 be explained as a protest against taxation? It is without question that the rebel uprising, or 'Peasants' Revolt' of 1381, was a major turning point in Medieval British History. Alastair Dunn for example, labels it 'the most significant outbreak of popular protest in British history'1, something which, when looking at the aftermath, can hardly be denied. Although undoubtedly sparked by the poll tax impinged on the people at the time, the Revolt can also be attributed to several underlying social and economic issues which plagued the country during the fourteenth century. These issues directly affected the course England would take as a country; and played an undeniable part in causing the unrest that manifested itself as the revolt of 1381. Occurring after decades of oppression of tenants under the idea of Serfdom, the Peasants' revolt was essentially a sudden and unpremeditated2 backlash against the King and his officials. During three days in June of 1381, rebels, many of whom were un-free tenants, or 'serfs', seized control of London, killing royal officials; in what would prove to affect the country like never before. After years of individual economic and social discontentment amongst the people of England, it was the poll tax of 1381 that acted as a common cause against the King and his people, and made the time 'ripe for revolt'3. It finally united not only the peasants, but artisans, some clergy and even minor gentry.4 However, to say the Revolt was merely an impromptu backlash against taxation would be foolish - the revolt was in fact the result of decades of economic and social dissention amongst the people of England, who were brought together by their anger at the poll tax. ...read more.

The Hundred Years' War, which consisted of continuous defeats for the English 20, proved to be nothing but a nuisance, particularly for those in the South-East, an area repeatedly ravaged by French naval raids.21 These attacks were in fact admitted in parliament after the Revolt, as being one of the main causes of the uprising22, and it's a fair thing to say indeed, as the majority of rebellion started in the region subjected to these attacks. Aside from the naval attacks suffered by those in the rebelling areas of England, the war had further consequences, particularly the large taxation, which was 'heavier and more sustained than it had been at any time since the 1340s' 23. It was indeed England's re-entry into war that required such taxation. To suggest that it irked people at the time is certainly an understatement. Serfs, already financially stifled by the Statute of Labourers, were to face further financial woe at the hands of the Government. This was naturally very frustrating. The fourteenth century was not one devoid of taxation by any means. It was something that, as in most societies was common and enforced. However, the poll taxes of 1377, 1379 and 1380, introduced due to exhaustion of traditional sources of revenue24, and intended to subsidise the war against France further were, for a lot of people, the last straw. Despite the reasonable success of the first two25, the poll taxes were seen as a further drain on the already meagre funds of the poorest of the poor. We mustn't forget that they'd already been subjected to a significant tax increase not long before the first poll-tax, making the blow of the poll tax even larger. ...read more.

But the government's reaction to this, to cruelly take away any of the serfs' chances of prosperity, was what really upset them. The church's supporting of the government alienated serfs further, as it meant they seemed to have nobody to turn to, and at Smithfield in 1381, abolition of serfdom was stated as one of the rebels' demands41. The war and the competence of the government when dealing with the war also had huge effects on the revolt's formation. Not only did the losing of the war infuriate those in England, but the taxation of a war which was being lost did also. The officials in charge of the war were also hated, and were attacked during the revolt; their incompetence and so-called 'treachery' being the primary reason. The motivations behind the revolt were very complex, with one reason being linked to or potentially dependent upon another. Had the Statute of Labourers in 1351 not have come about; the crisis of confidence in the government and their handling of such issues may not have manifested itself. Had England have been winning the war, the taxation may not have bothered the people as much, and once again, the government and officials may have been more trusted and liked, potentially averting a revolt. It is impossible to say how far each factor influenced the rebels of the revolt, but what is sure is that the revolt can not be simply labelled as a 'protest against taxation'. Rather it was a protest against all the political, social and economic struggles that the country had struggled with for so many years. So, although taxation can be cited as a motivation behind the revolt, the picture is really, much bigger than that. ...read more.