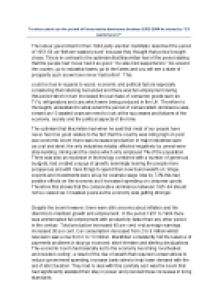 To what extent can the period of Conservative dominance between 1951-1964 be viewed as 13 wasted years?

﻿To what extent can the period of Conservative dominance between 1951-1964 be viewed as ?13 wasted years?? ________________ The labour government in their 1964 party election manifesto described the period of 1951-64 as ?thirteen wasted years? because they thought that period brought chaos. This is in contrast to the optimism that Macmillan had of the period stating that the people had ?never had it so good.? He also told supporters to "Go around the country, go to industrial towns, go to the farms and you will see a state of prosperity such as we have never had before". This could be true in regards to social, economic and political factors especially considering that rationing had ended and there was full employment during this period which in turn increased the purchase of consumer goods such as TV's, refrigerators and cars which were being produced in the UK. Therefore to thoroughly understand to what extent the period of conservatism dominance was viewed as 13 wasted years we need to look at the successes and failures of the economy, society and the political aspects of the time. The optimism that Macmillan had when he said that most of our people have never had it so good relates to the fact that the country was riding high on post war economic boom; there was increased production in major industries such as ...read more.

During this period Agriculture was doing well because the state kept on giving subsides. Farmers being happy were good for conservatives because a lot of their votes come from the rural areas; they are a natural constituency of support for the Tories. The conservatives period of dominance was therefore not 13 wasted years as during that time they had some highly talented politicians for example Eden Butler, Macmillan and even Churchill and they remained in power as the electorate saw that the conservatives were making a difference to Britain. The government was also further more rocked by failure to join ECC. Macmillan decided to pursue an application for membership of the European Economic Community which split the party and was subsequently vetoed by French President Charles de Gaulle. In 1962, government unpopularity spurred Macmillan into dismissing one-third of the Cabinet this upset many of his own supporters. The following year, his handling of the Profumo affair - when his War Minister resigned after admitting lying to the House about his affair with a prostitute - left him looking out of touch with events. He looked old, and old-fashioned, in comparison with the new Labour leader so things appeared unstable. To add the idea that things appeared unstable Macmillan was seriously ill he had had a major abdominal operation which undermined his position. ...read more.

There was an initial rise in consumer goods as previously mentioned however there were more consumer goods being made than actually being bought in Britain, there was a share of world trade that had decline in this pose war era. This was due to other countries being starved financially from the war and couldn't afford to export goods from other countries. Ironically though, those 'starved' countered achieved better capital GDP than Britain because they had to literally start their economies up again, as did Britain. It ended up with Britain losing money abroad as they had a lot of investment abroad and countries couldn't afford their products due to the failing economies. Therefore in conclusion looking at the economic political and social factors you can see that the conservative dominance between 1951-64 was ?13 wasted years? to an extent. Things had improved and some people perhaps really hadn?t ?had it so good? before but there were still many negative factors such as those in which Macmillan even said in his speech where he reminded his supporters of the ?rationing, shortages, inflation, and one crisis after another in our international trade? under a labour government which goes to suggest that perhaps the people ?never? had it ?so good? and therefore the conservative dominance was seen as 13 wasted years compared to previous times such as Attlee?s government. ...read more.