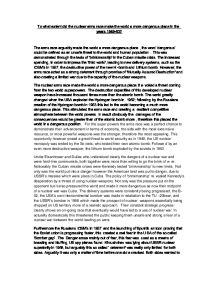 The arms race arguably made the world a more dangerous place, the word ‘dangerous’ could be defined as an unsafe threat to the world and human population. This was demonstrated through the tests of ‘brinkmanship' in the Cuban missile crisis. The increased spending, in order to impress the ‘third world', leading to new delivery systems, such as the ICBM's in 1957, the destructive power of the new H-bomb and Lithium bomb. However, the arms race acted as a strong deterrent through promise of 'Mutually Assured Destruction' and also creating a limited war due to the capacity of the nuclear weapons.

The nuclear arms race made the world a more dangerous place; it evoked a threat coming from the two world superpowers. The destruction capacities of this developed nuclear weapon have increased thousand times more than the atomic bomb. The world greatly changed when the USA exploded the Hydrogen bomb in 1952; following by the Russians creation of the Hydrogen bomb in 1953 this led to the world becoming a much more dangerous place. This stimulated the arms race and creating a resilient competitive atmosphere between the world powers. In result obviously the damages of the consequences would be greater than of the atomic bomb more, therefore this placed the world in a dangerous position.  For the super powers the arms race was a perfect chance to demonstrate their advancement in terms of economy, the side with the most extensive resource, or most powerful weapons was the stronger, therefore the most appealing. This opportunity however posed a great threat to world security as in 1949, the US nuclear monopoly was ended by the Soviets, who tested their own atomic bomb. Followed by an even more destructive weapon; the lithium bomb exploded by the soviets in 1953.

Under Eisenhower and Dulles who understood clearly the dangers of a nuclear war and were hard-line communists, both together were more than willing to go the brink of war. Noticeably the Cuban missile crises were Kennedy tested ‘brinkmanship’ to new limits. Not only was the world put into a danger however the American land was put to danger, due to USSR’s missiles which were place in Cuba. The policy of ‘brinkmanship’ revealed Kennedy’s desperation by a threat of using nuclear weapons. Not only was the pressure put on the opponent but it also pressured the world and made it more dangerous as now their midpoint of a nuclear war was Cuba. The delivery systems were constantly being progressed, the B-52, the USA’s own intercontinental bomber was made in retaliation to the TU-20bear, and the USSR’s bomber in 1956 which made the prospect of nuclear weapons essentially being dropped on US territory more of a realistic approach. Their constant strategic progress clearly shows an on-going race that eventually would have led to a use of nuclear war. In actuality domestically this threatened the public keeping them unsafe and strong a fear of a nuclear war between the world leading powers.

Furthermore the Russians ICBM's in 1957 and the launching of Sputnik an icon proving that the Soviet union is progressing faster, this created a real fear in the USA of the so called ‘Bomber gap’. The  Danger arose mainly out of fear, this fear was used as a means of boasting and bluffing, US spy planes found Khrushchev was lying about USSR nuclear superiority in 1958, but arguably this so called ‘deterrent' was really only limited for both sides. Arguably it was only a matter of time before one side cracked. Both sides wanted to establish their blocs in order to ease this insecurity. As Americas world position was threatened by the on-going competition of nuclear progress, threating one another indirectly with their superiority, alongside increasing the capacity of destruction and making the world an unsafe place. Arguably the different personalities of both sides can be a minor factor of the increase of danger, as both were holding up their prestige and pride, this contributed to isolating the main issue; the destruction capability and how strongly it is making the world a dangerous place.

However the promise of mutually assured destruction (MAD) was the perfect deterrent and the threat of nuclear war was to be the grounds for peaceful co-existence. The idea that less nuclear weapons should be produced instead of more powerful nuclear weapons. Which makes it less valid in physically securing world peace, but in terms of better communication; this marked a renewed sense of security as both sides were alerted that nuclear conflict was the last option and by far the one that need be avoided at all costs. Whilst it is argued the risks of using nuclear weapons as a negotiating tool, or discussing the dangers of brinkmanship, it can also be argued, that these methods did make the world safer. Arguably it resulted to a limited war preventing each side to use their weapons, as both knew the consequences were equal and they have reached their level of superiority in result it urges cautions in the world. Arguably this did not make the world a safer place but it did make it a less dangerous for that time being. For example the concept of limited war was used to avoid direct confrontation, which emerged during the Korean war of 1950-54 where there was a real threat of the war escalating, however Truman preferred to use military tactic which ensures the war remained limited in scale i.e. declining the use of nuclear weapons against china.

To conclude the nuclear arms race was a political tool which was operated by different leaders in order to establish them in a very unstable world (post war) through supremacy. The arm race established two blocs and made both sides wearies of one another however leading to co-operation through fear. Evidently the Cuban missile crisis undeniably made the world stand motionless, and understandably made the world feel more dangerous, the probability of all-out war would have been much higher had the nuclear weapons not been the deterrent. However the threat of nuclear war was limited due to the awareness of its destruction and equal possession, which urges cautions in the world. Additionally during the arms race there was no military opponent of direct confrontation of conflict therefore arguably the nuclear arms race prevented an escalation of conflict of different ideologies and supremacy. In some ways an on-going empty threat was revolving around the world making the world unsafe and dangerous however it also assured a limited war through the idea of mutual assured destruction an ultimate deter for both superpowers.

This is a good essay that responds well to the question and has some good factual detail, but would benefit from a better style of writing and more accurate knowledge. The student clearly understands the need to consider both sides ...

This is a good essay that responds well to the question and has some good factual detail, but would benefit from a better style of writing and more accurate knowledge. The student clearly understands the need to consider both sides of the argument - the idea that the arms race made the world more dangerous, and the idea that it made the world less dangerous. It is sometimes hard for students to understand that there is a strong argument that such a harmful thing as nuclear weapons made the world less dangerous, but this student clearly has a good understanding as they devote about a third of the essay to this idea (fifth paragraph), showing that they are thinking widely about it rather than having one opinion. This is also reflected in the fact that they make frequent use of words such as "arguably" (such as "The arms race arguably made the world a more dangerous place..."), which is good as it shows they recognise that in history everything can be interpreted differently depending on your argument.

The student is clearly knowledgeable about some aspects of the nuclear arms race: for example, they correctly point out that Russia successfully tested a hydrogen bomb in 1953, and the use of the precise year is good as it shows that the student recognises the whole period was not the same and there was change over time. They also show a good understanding of concepts such as "brinkmanship" and an impressive knowledge of the technology used. In the third paragraph this borders on telling a story rather than an explanation - examiners are looking for facts with explanations rather than description. Some of the other factual detail is inaccurate, such as saying that increased nuclear spending was to impress the Third World. While there is a connection between the Cold War and the Third World, this student makes it sound as though it is the only reason for increased nuclear spending, which it isn't. It would be better to say something like "The increased spending, in part to impress the 'third world'...".

The student is right to make judgements like "...the different personalities of both sides can be a minor factor..." because it points out that one factor could be seen as less important than another. This is good as it shows that the student has the knowledge to assess several factors and use their judgement to see which is less important in answering the question. The essay's conclusion is good as it summarises the argument, pointing out key ideas the student has already referred to, such as the Cuban missile crisis. Using words such as "however" in the conclusion reminds the examiner that the student is aware of alternative interpretations.

It would be better for the student to say "Russia" rather than "the Russians" (and so on), as this sounds informal and out of place in a serious academic piece. The student should also be careful that their writing makes sense: the last sentence of the second paragraph should really be part of the previous sentence, as it sounds broken and out of place to start a new sentence here. Errors like this seem minor but they make the essay harder to read: it would sound much more appropriate and academic if it was proofread.