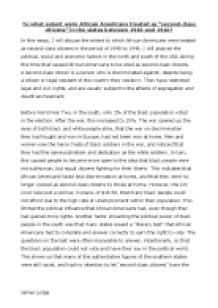 To what extent were African Americans treated as second-class citizens in the states between 1940 and 1946?

﻿To what extent were African Americans treated as ?second-class citizens? in the states between 1940 and 1946? In this essay, I will discuss the extent to which African Americans were treated as second-class citizens in the period of 1940 to 1946. I will analyse the political, social and economic factors in the north and south of the USA during this time that caused African Americans to be cited as second-class citizens. A second-class citizen is a person who is discriminated against, despite being a citizen or legal resident of the country they reside in. They have restricted legal and civil rights, and are usually subject to the effects of segregation and disenfranchisement. Before World War Two, in the south, only 2% of the black population voted in the election. After the war, this increased to 15%. The war opened up the eyes of both black and white people alike, that the war on discrimination they had fought and won in Europe, had not been won at home. Men and women saw the heroic feats of black soldiers in the war, and noticed that they had the same patriotism and dedication as the white soldiers. In turn, this caused people to become more open to the idea that black people were not subhuman, but equal citizens fighting for their liberty. ...read more.

If a white man was on the pavement and there was only room for one, the black man had to move off the pavement and allow the white pass with ease. Authorities in the south also tended to spend more money on the white Also, 40% of black housing in Washington DC was substandard, whereas only 12% of white housing fell into this category. This indicates the great difference in the wealth of each race, and that African Americans may have been segregated into one area of a city where housing was of lower quality than other areas. In fact, on September the 11th, 1941, 100 African American houses were demolished to make room for the US Government's Pentagon building, by the US Army. This shows a disregard for the opinion and well-being of black people between 1940 and 1946. In the north, however, there was not much segregation. Black and white men and women lived together with almost no disturbances. This allowed the different races and cultures to mix, creating an understanding between them that was not found in the south, due to the lack of willingness to embrace other ways of life. An understanding of eachother meant that there were very few issues between the two races. ...read more.

While it was a step forward, it was limited by the fact that the leaders of colleges and schools still decided what would be taught, and how it would be assessed. In Virginia, a southern state, there was a ruling that African American teachers must have equal salary to that of a white person. This shows us that there was progress being made to workplace equality, and that African Americans were no longer seen as ?second-class citizens? in all cases. In conclusion, despite black citizens being given some form of education, housing and an opportunity to vote, these were all severely restricted in most cases; for the most part in the Southern states. Education was of varying quality, as was housing. While black people did gain more of a right to vote, they were still limited by poll tax and literacy tests. To an extent, black people appeared to be ?second-class citizens?, though their conditions certainly and noticeably improved between 1940 and 1946. They were mostly restrained by social attitudes towards people of other ethnicities than white, and the unwillingness to to accept African Americans as members of society. Black citizens of the USA were still, overall, more second-class than first-class by a long way, and conditions did not notably improve until much later. James Lodge ...read more.