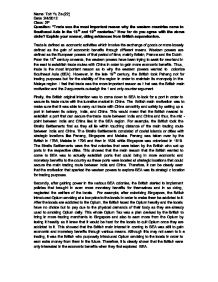 Trade was the most important reason why the western countries came to Southeast Asia in the 18th and 19th centuries. How far do you agree with the above claim? Explain your answer, citing evidences from British expansionism.

Question: "Trade was the most important reason why the western countries came to Southeast Asia in the 18th and 19th centuries." How far do you agree with the above claim? Explain your answer, citing evidences from British expansionism. Trade is defined as economic activities which involve the exchange of goods or more loosely defined as the gain of economic benefits through different means. Western powers are defined as the European powers of that period of time, mainly Britain, France and the Dutch. From the 18th century onwards, the western powers have been trying to seek for new land in the east to establish trade routes with China in order to gain more economic benefits. Thus, trade is the most important reason as to why the western powers wanted to colonize Southeast Asia (SEA). However, in the late 19th century, the British took Pahang not for trading purposes but for the stability of the region in order to maintain its monopoly in the Malaya region. I feel that trade was the more important reason as that was the British main motivation and the 2 arguments outweigh the 1 and only counter argument. ...read more.

This showed that the main reason that the British wanted to come to SEA was to actually establish ports that could bring in more economic and monetary benefits to the country as these ports were located at strategic locations that could secure the main trading route between India and China. Therefore, it can be clearly seen that the motivation that sparked the western powers to explore SEA was its strategic location for trading purposes. Secondly, after gaining power in the various SEA colonies, the British started to implement policies that brought in even more monetary benefits for themselves and in so doing, neglected the welfare of the locals. For example, after colonizing Singapore, the British introduced Opium smoking at a low price to the locals in order to make them be addicted to it. After the locals are addicted to the Opium, the British taxed the Opium heavily and the locals have no choice but to pay due to the physical demands of their body as they are already used to smoking Opium daily. This whole Opium Tax was a plan devised by the British to bring in more trading merchants to Singapore and also to ...read more.

However, Pahang as a large state will be socially unstable and chaos may erupt as the Sultan is weak to control his whole state. Therefore, the British decided to intervene with a resident in order to ensure that the Malayan region is politically stable and no chaos will erupt to disrupt its trading interests. In addition, the British could display its Imperial Might and Pride to the other western powers by taking over Pahang. This would ensure that the British remain control over the monopoly in SEA. Therefore, it can be seen that during the later stages of the century, the British were already economically stable and just needed to maintain the security of its trading interests, without the need to look for new ports. In conclusion, although the British did take certain Malaya states without trading motivations, the British initial motivation to come and explore SEA was due to the need to secure the trade route between India and China. Therefore, I believe that trade was the main reason as to why the western powers came to SEA in the 18th to 19th centuries. ?? ?? ?? ?? Name: Toh Yu Ze (22) Date: 2/4/2012 Class: 2P ...read more.