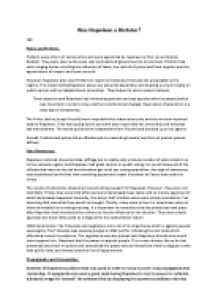 Was Napoleon a dictator?

ï»¿Was Napoleon a Dictator? YES: Police and Prefects: Prefects were a form of secret police and were appointed by napoleon as first consul (mainly Nobles). They were seen as the eyes, ears and hands of government at a local level. Prefects had wide ranging duties including the collection of taxes, the control of prices and food supplies and the appointment of mayors and town councils. However, Napoleon also used Prefects to report on behaviour that was not acceptable to the regime. This meant telling Napoleon about any potential opposition and keeping a very strict grip on public opinion with propaganda and censorship. They helped to secure power because: They helped ensure Napoleon had minimal opposition and was popular with the people (which was important in order to stop another constitutional change). Repression of opposition is a clear sign of dictatorship. The Police (led by Joseph Fouché) were responsible for national security and the minister reported daily to Napoleon. They had spying duties and were also responsible for censorship and everyday law enforcement. The secret police were independent from Fouché and checked up on his agents. Overall, Prefects and police did an effective job in preventing trouble; any form of protest proved difficult. ...read more.

If people were allowed to form their own opinion of him it is doubtful that his power would?ve been secure. Control of the press: In 1800 he reduced the number of hournals published in Paris from 73 to 13. Those that remained where kept under close police supervision. Le Moniteur was made the official government newspaper and the only source press could use to report on military news. Topics like the Coup De Brumaire were strictly not discussed. Books, plays, lectures and posters had to be sent to a team of censors for inspection and publishers were forced to swear an oath to the government. Authors could be punished by death if they were found to be printing anti-Napoleon material. The Livret The Livret (introduced in 1803) was also used to keep control over workers. Napoleon has witnessed the power of ordinary people during the Vendemaire uprising of 1795 and the potential threat they posed to the state. The Livret was a passbook which every worker was expected to have and to hand to each new employer. It also operated as a form of identity card as it had the individuals personal details. Movement of labour was severely restricted and it was very difficult to change employment. This is dictator like as it shows Napoleon?s need to restrict people?s mobility and?.. ...read more.

This was also the case of other careers in government where Napoleon claimed jobs would go to the most qualified person and past political affiliations would not be accounted for. Therefore some positions in government were given to those who would perform the best and not necessarily just those who would be loyal to Napoleon. Napoleons attitude to religion is unlike that of a normal dictators. There was a lot of religious toleration to Jews and Protestants who could worship freely. There were balances on his power which means it wasn’t absolutism? The Acte Additionel (written by Benjamin Constant) was created with the intent of winning over liberals by promising : The legislative power was to be exercised by the Emperor together with the Parliament, which was to be composed of two chambers: the Chamber of Peers composed of hereditary members appointed by the Emperor, and the Chamber of Representatives, composed of 629 citizens elected for 5 year terms by electoral colleges in the individual départments. The ministers were to be responsible to the Parliament for their actions. The liberalization dealt both with the guarantees of rights and the end of censorship/free press. As before, the constitutional changes were proposed to the French people through a plebiscite which gained a lot of support. In the conclusion and throughout must refer to how it is changing within the time period? ...read more.