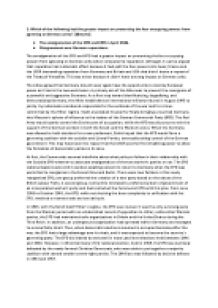 Which had the greater impact on preventing the four occupying powers from agreeing on German unity, the amalgamation of the SPD and KPD in April 1946 or disagreement over German reparations?

When the Germany was allowed to hold elections for a new parliament, Stalin hoped that the KPD would form a governing coalition with the socialist and Liberal Parties, eventually taking control of the German government. This may have been the reason that the USSR was the first inhabiting power to allow the formation of democratic parties in its zone. At first, the Communists seemed indefinite about what policy to follow in their relationship with the Socialist SPD-whether to advocate amalgamation of the two worker's parties or not. The SPD national leaders were still in London awaiting consent to return to Germany when the SPD was permitted to reorganise in the Soviet Zone and Berlin. ...read more.

In addition, an underground organization had operated within Germany and managed to survive fairly intact. Thus, when democratic elections resumed in occupied Germany after the war, the SPD had a large advantage over its rivals, and it was expected to become the country?s governing party. The SPD did indeed do very well in most Land level elections held between 1946 and 1948. However, in West Germany?s first national election, held in 1949, the SPD was narrowly defeated by the newly formed Christian Democrats, who were able to put together a majority coalition with several smaller centre-right parties. The 1949 loss was followed by decisive defeats in 1953 and 1957. ...read more.