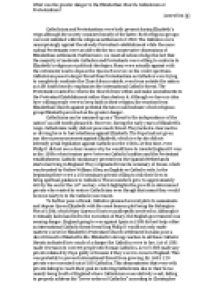 Wht was the greater danger to the Elizabethan Church: Catholicism or Protestantism?

﻿What was the greater danger to the Elizabethan Church: Catholicism or Protestantism? James Kim (g) Catholicism and Protestantism were both present during Elizabeth?s reign although the society consisted mostly of the latter. Both religious groups were not satisfied with the religious settlement of 1559. The Catholics were unsurprisingly against the already-Protestant establishment while the more radical Protestants were at odd with the too conservative dimensions of Elizabethan settlement. Furthermore, we must all acknowledge the fact that the majority of moderate Catholics and Protestants were willing to conform to Elizabeth?s religious or political ideologies. Many were actually against with the extremists? zeal to depose the Queen. However, in the wider spectrum, Catholicism posed a larger threat than Protestantism as Catholics were trying to completely eradicate the Church from outside, even from outside the nation as AGR Smith heavily emphasises the international Catholic threat. The Protestants wanted to reform the Church from within and make amendments to the Protestant Establishment rather than destroy it. Although we have no idea how willing people were to keep faith in their religion, the reaction from Elizabethan Church against potential threats would indicate which religious group Elizabeth perceived as the greater danger. ...read more.

Elizabeth?s strong reaction to all these Catholic threats indicated how much of a danger the Catholics were to her. Act of 1581 made it treason to convert people into Roman Catholics. Act of 1585 made any priest ordained by Pope guilty of treason if they were to come to England. This was probably to prevent international threat from growing. By 1603, 120 priests were executed out of 180 Catholics. This demonstrates that even with priests failing to reach their goal in restoring Catholicism due to their focus mainly being South of England where Catholicism was relatively weak, failing to properly address the ?lower orders of Catholics? according to Christopher Haigh, Elizabeth took these threats seriously. The Elizabethan Church propagandists would justify these priests? execution by saying they simply were against Elizabeth?s secular policies. They tried to cover up the religious conflict by claiming there were only secular problems between Catholics and the Church. Even with strong resistance, the zeal of priests did not die down that shows that even a minority could easily hold its potentially-dangerous stance against Elizabeth. ...read more.

Intensified legislation against radical Protestants meant that more people would opt to be loyal to the Queen than pursue their radical Protestant faith, which would guarantee negative consequences. Catholics and Protestants had to deal with heavy blows from Elizabeth?s Church. The slightly milder reaction from the state against the Presbyterians and how easily the Puritans gave way to such reactions show that the Catholics were the slightly more dangerous threat to Elizabeth. In addition, we must also acknowledge the fact that the Catholic threat was also fuelled from international sources like King Philip II and seminary priests from the Spanish Netherlands. In the end, both groups were minorities and had their own setbacks and fragmentations from within, which is why they never truly succeeded in attacking the Elizabethan Church or deposing her. The majority of Catholics and Protestants were satisfied with outwardly conforming with Elizabeth?s church policies and practicing their faith freely within their households. Therefore, neither of the two religious groups really posed a true threat to the Church but the Catholics were marginally more dangerous as international Catholic aid was readily available. ...read more.