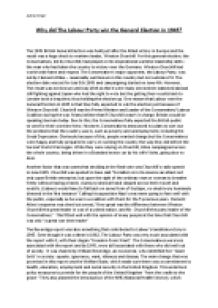 Why did The Labour Party win the General Election in 1945?

﻿Jamie Greer Why did The Labour Party win the General Election in 1945? The 1945 British General Election was held just after the Allied victory in Europe and the result was a huge shock to wartime leader, Winston Churchill. For this general election, the Conservatives, led by Churchill, had played on his inspirational wartime leadership skills ? the man who had taken the country to victory over the Germans. Winston Churchill had world-wide fame and respect. The Conservative's major opponent, the Labour Party, was led by Clement Attlee ? reasonably well known in this country but not outside of it. The election date was set for July 5th 1945 and campaigning started on June 4th. However, The result was not known until July 26th as there were many servicemen stationed abroad still fighting against Japan who had the right to vote but the getting their results back to London took a long time, thus holding the election up. ...read more.

Another factor that was somewhat deciding in the final vote was Churchill?s radio speech in June 1945. Churchill was quoted to have said ?Socialism is in its essence an attack not only upon British enterprise, but upon the right of the ordinary man or woman to breathe freely without having a harsh, clumsy tyrannical hand clasped across their mouth and nostrils. (Labour) would have to fall back on some form of Gestapo, no doubt very humanely directed in the first instance? Calling his opposition n**i?s was never going to fare well with the public, especially as he was in a coalition with them for the 5 previous years. Clement Atlee?s response was short but sweet; ?How great was the difference between Winston Churchill the great leader in war of a united nation, and Mr. ...read more.

They also planned the introduction of the NHS (National Health Service), which provided free healthcare for everyone in the country, regardless of social class. As this would no doubt improve the state that the country was in, many people voted for Labour because of this. Also the fact that the Conservatives were publically against the report would not have helped their campaign. Even though Labour was ?classed? as a ?working class party?, many of the middle class population were prepared to vote for them in 1945. This was because the country was in decline and the Conservatives were doing nothing about it. Another reason was the fact that the conservatives dealings with Hitler before the war at Munich (Munich Agreement, country being led my Neville Chamberlain at the time) and the policy of appeasement were now looked on in shame and blamed on the Conservatives, going as far as saying that they caused the war. ...read more.