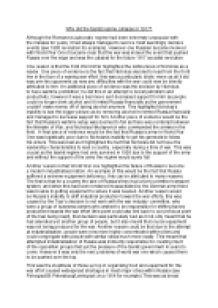 Why did the Tsarist regime collapse in 1917?

﻿Why did the tsarist regime collapse in 1917? Although the Romanovs autocratic regime had been extremely unpopular with the masses for years, it had always managed to survive most seemingly decisive events (see 1905 revolution for example). However one Russian became involved with World War One it became clear that the war was indeed the event that pushed Russia over the edge and was the catalyst for the future 1917 socialist revolution. One reason is that the First World War highlighted the deficiencies of Nicholas as a leader. One piece of evidence is the fact that Nicholas decided to lead from the front line in the face of a waning war effort, this was a particularly idiotic move as all it did was arm his opponents as now any difficulties with the war could now be directly attributed to him. ...read more.

This was bad as it highlighted the fact that Nicholas did not have the leadership characteristics to lead a country, especially during a time of war. This was crucial as the tsarist regime had only survived in 1905 due to the support of the army and without the support of the army the regime would surely fall. Another reason is that World War one highlighted the failure of Russia to become a modern industrialised nation. An example of this would be the fact that Russia suffered a extreme equipment deficiency, this can be attributed to many reasons. The first is that for a country the size of Russia?s they had a far to primitive transport system, and when this had been rendered incapacitated by the German army there was trouble in getting equipment to where it was needed. ...read more.

However it was only the next problems of world war one which caused them to be pushed over the top. This was the ineptitude of those up top in organising food and equipment for the war effort caused widespread shortages in most major cities within Russia (see Petrograd/St Petersburg/Leningrad circa 1914 for example).This was as bread rationing was introduced due to a lack of supplies for the frontline, also there was a lack of oil and gas within most Russian cities. This would eventually lead to riots in 1917 as angry citizens and now disloyal army members took to the streets (shouting phrases such as ?Down with the German woman! Down with Protopopov! Down with the war! Down with the Tsar?) due to a lack of most supplies. This was one of the crucial tipping points within the relations between the autocracy and the people. ...read more.