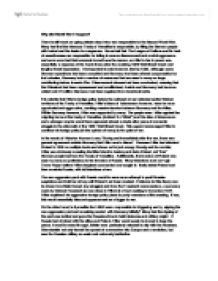 Why did World War II happen?

Why did World War II happen? There is still much on-going debate about who was responsible for the Second World War. Many feel that the infamous Treaty of Versailles is responsible, by filling the German people with hatred and the desire for vengeance. Some feel that The League of Nations and its lack of assertiveness are responsible for failing to ensure disarmament and control aggressors and some even feel that economic turmoil was the reason, as Hitler's rise to power was essentially a response of the harsh times after the crushing 1929 Wall Street Crash and lengthy Great Depression. It is important to note however, that by 1938, although some German reparations had been cancelled and Germany had been offered compensation for lost colonies, Germany took a number of measures that are seen to many as large contributing factors towards War. Disarmament clauses had been overlooked, meaning that the Rhineland had been repossessed and remilitarised, Austria and Germany had become united and 3.5 million Germans had been regained from Czechoslovakia. ...read more.

and from the Hossbach memorandum, a summary made by Colonel Hossbach (a man close to Hitler) at a n**i meeting in November 1937. Hitler explained his aggressive foreign policy plans to party-members at this meeting. If true, this would essentially discount appeasement as a trigger to war. On the other hand, is it possible the USSR were responsible for triggering war by signing the non-aggression pact and remaining neutral with Germany initially? Many feel the signing of the pact was tactical and gave the Russians time to build defences and military might. If Russia had of joined with the allies and Poland, Hitler would surely be forced to keep the peace. It must be noted though, Britain were particularly reluctant to ally with the Russians. Chamberlain not only feared the spread of communism into Europe and a revolution, but saw the Russian military as weak and extremely ineffective. The axis powers were extremely fearful of both communism and Fascism. ...read more.

Chamberlain has been publically criticised for backing the wrong issue when he made a stand against Hitler when he entered Poland in September 1939. Poland had a relatively weak military force and was geographically difficult to defend. If Chamberlain had of made his stand when Hitler seized Munich, he could have backed the Czechs who had a powerful industry and a much stronger military force than Poland. Many question Chamberlain's motives, as intervention at Munich would appear a much more logical choice to curb Hitler's expansion. Supporters of Chamberlain claim his actions provided Britain with more time to prepare for war. Although opinions are divided over who started World War II, it widely believed that Hitler's vicious foreign policy and eventual invasion of Poland in 1939 was the trigger point. In the words of German historian J Hest; "Hitler's entire career was orientated towards war". Before 1st September 1939, nationalistic tensions, unresolved issues, Hitler's aggressive expansion, allied fear of communism and fascism, resentments stemming from World War I and the Great Depression played large parts in setting the stage for war. ...read more.