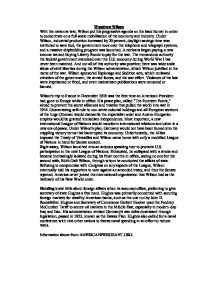 Woodrow Wilson With the nation at war, Wilson put his progressive agenda on the back burner in order to concentrate on a full-scale mobilisation of the economy and industry. Under Wilson, industrial production increased by 20 percent, daylight savings time was instituted to save fuel, the government took over the telephone and telegraph systems, and a massive shipbuilding program was launched. Americans began paying a new income tax and buying Liberty Bonds to pay for the war. The tremendous authority the federal government exercised over the U.S. economy during World War I has never been matched. ...read more.

His peace plan, called "The Fourteen Points," aimed to prevent the secret alliances and treaties that pulled the world into war in 1914. Guaranteeing self-rule to non-white colonial holdings and all European sections of the huge Ottoman would dismantle the imperialist order and Austro-Hungarian empires would be granted immediate independence. Most important, a new international League of Nations would transform international relations and usher in a new era of peace. Under Wilson's plan, Germany would not have been forced into the crippling victory terms that bankrupted its economy. Unfortunately, the Allies imposed the Treaty of Versailles and Wilson came home with only a modified League of Nations in hand for Senate consent. ...read more.

America never joined the international organisation that Wilson had as the hallmark of his New World order. Harding knew little about foreign affairs when he assumed office, preferring to give secretary of state Hughes a free hand. Hughes was primarily concerned with securing foreign markets for wealthy American banks, such as the one run by John D. Rockefeller. Hughes and Secretary of Commerce Herbert Hoover used the Fordney McCumber Tariff to secure oil markets in the Middle East, especially in modern-day Iraq and Iran. His administration revised Germany's war debts downward through legislation, passed in 1823, known as the Dawes Plan. Hughes also called for a naval conference with nine other nations to freeze naval spending in an effort to reduce taxes. Information above from AMERICANPRESIDANT.ORG. ...read more.