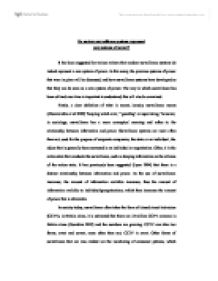 discusses the importance of Gemeinschaft, which loosely translated means community. In pre-modernity societies, community and kinship were important to maintain social order. The use of surveillance systems have been increasing since the 19th Century when police first began patrolling 'the beat' (McLaughlin & Munice 2000) in order to reduce crime and in hope of becoming more accessible to the public. Moreover, by making a police presence felt, it could be suggested that this is one of the earliest forms of using surveillance as a system of power. The police are still used as a form of surveillance in the present day; however, this is an accepted form of surveillance and people do not largely see this as a system of power that infringes upon civil liberties and is there legitimatised, whereas, the afore mentioned monitoring of consumption patterns could be seen as hyper-surveillance (Boggard 1996). However, some sociologists (Rose 1989) argue that there has to be coercion within society for these types of surveillance to have effect. Rose (1989) discusses the way in which systems of social control, such as administration and record keeping, are only maintained by the co-operation of the population, Rose called these processes 'governing the soul'. Durkheim also argued that social order could only be maintained through a 'conscience collective.' ...read more.