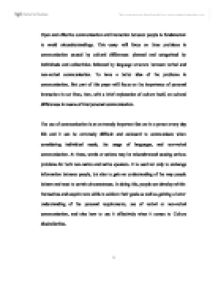 Open and effective communication and interaction between people is fundamental to avoid misunderstandings. This essay will focus on three problems in communication caused by cultural differences planned and categorized by individuals and collectivists followed by language structure between verbal and non-verbal communication. To have a better idea of the problems in communication, first part of this paper will focus on the importance of personal interaction in our lives, then, with a brief explanation of culture itself, on cultural differences in means of interpersonal communication. The use of communication is an extremely important feature in a person every day life and it can be extremely difficult and awkward to communicate when considering individual needs, the usage of languages, and non-verbal communication. At times, words or actions may be misunderstood causing serious problems for both non-native and native speakers. It is used not only to exchange information between people, but also to gain an understanding of the way people behave and react to certain circumstances. In doing this, people can develop within themselves and acquire new skills to achieve their goals as well as gaining a better understanding of the personal requirements, use of verbal or non-verbal communication, and also how to use it effectively when it comes to Culture dissimilarities. ...read more.

They cherish the loyalty, cooperation, compliance, and also reputation of the group. While collectivist cultures tend to accept that different groups have different priorities, the individualists tend to believe that there are universal values that should be shared by all. Another problem in the sphere of communication, while reflecting on cultural differences, is the verbal usage and structure of languages. Language is a spoken way of communicating with each other by using verbal signals. Those oral signals are noting more than words that we use. What is more, the way we categorize those unwritten expressions is unique for human beings. Whole patterns of language structure and subject-matter are linked in the most complex way. A person has only to pick up a book to be aware of the impenetrability of the subject because of its complicated, precise and unique language. Piaget (1998), from the University of London, states that one can try to understand certain language patterns by exercising processes of organizing, recalling and developing thought. Achieving a full recognition of the existence of language varieties is a problematical phenomenon mainly because of communication difficulties that can follow it. ...read more.

Retaining that information, McGee concludes that when a person is sensitive to these non-verbal messages, he therefore should understand the whole conversation effortlessly. In addition, that individual is more likely to interact with others in a comfortable manner. The implications of these three problems in communication in terms of cultural differences show that misunderstandings between people can be prevalent. It is important for individuals to understand the importance of cultural variations in order to help them recognise their shared and different identities. In terms of individualists and collectivists, communication is important when it comes to effective work. For example, individualists prefer to work alone, where as collectivists tend to work as part of a team, to help society as a whole. This means that the understanding of how each group works is extremely important in completing tasks efficiently. The problem between verbal and non-verbal communication can be considered as the main difficulty in preventing misunderstandings between people. However this can be resolved by the appropriate usage of language structures, verbal communication and kinaesthetic movements. Having looked at the different problems that can arise within societies, we can see that it is not necessarily the knowledge of the different cultures that is needed to achieve intercultural communication. ...read more.