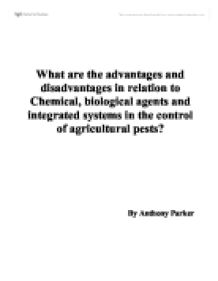 What are the advantages and disadvantages in relation to Chemical, biological agents and integrated systems in the control of agricultural pests?

What are the advantages and disadvantages in relation to Chemical, biological agents and integrated systems in the control of agricultural pests? By Anthony Parker Introduction Firstly, we need to establish the core concept of a pesticide. A pesticide is a group of different chemicals that are specific to kill different types of animal or plant. The three most common types of pesticide are insecticides, fungicides and herbicides. "Pesticides are a chemical or chemicals sprayed onto plants to kill insects and grubs (1)". Causes & Effects of Insects If we were to live in a society without pesticides, what would happen? Insects would eat all of the crops, we use to feed our world population. The insects would eat all photosynthetic material causing low photosynthesis, causing low growth, stunted specimens and a low yield. They would eat all vegetables and fruit, lay eggs in crops, which would cause low consumer confidence due to illness. This intern would facilitate losses of huge profit, jobs and also the economy would suffer. We know from the basic facts of biology that plants needed to be pollinated. With increased use of pesticides, this would not occur, as most insects would be killed, this would not be good, as insects pollinate the vast majority of are crops. Advantages & Disadvantages of the use of Pesticides The main reason we use pesticides are to stop inter-specific competition, either between weeds and crops or between insects and crops. ...read more.

This process occurs when chemicals drain through porous soil into a nearby river system killing fish and other wildlife living in the biome. This causes algae and pond weed to grow covering the river decreasing oxygen and light causing more fish to die. The cycle continues until there has been a complete break down in the food chain or the river is cleaned by environmental agencies. Another point is that due to the nature of a food web from producer to consumer, a bird will eat several mice a day. The chemical levels will increase in the bird. Then foxes eat these birds, although the toxic levels in the birds are small, the fox eats many of them. This causes a toxic build up in the foxes body, eventually killing it. This process is called bioaccumulation. As you can tell just by adding a small amount of pesticides to a localised area, you can cause a whole food web and ecosystem to be destroyed causing a depletion in large numbers of species. Although this is a localised case, in just one field, imagine if this was done all over the country. This would cause a countrywide drop in population of all animals that are linked by into each other's food webs as of the case of DDT. Advantages & Disadvantages of the use of Biological Agents A biological agent, is a creature that naturally eats a particular animal, plant or fungi, without destroying the primary crop. ...read more.

Conclusion Although the situation has now occurred that farmers need to gain as much profit as possible for farming to be sustainable. There is still a question on when to use each different method, do they add biological agents first to kill most pests then destroy the biological agents with the pesticides. I think the answer is to still use pesticides for most out breaks but introduce the biological agents when safe to do so after chemical pesticides have been used, reducing the amount of pests for the future. There are different opinions on all of these systems. The web site: - http://news.bbc.co.uk/hi/english/talking_point/newsid_1418000/1418142.stm Has many of these opinions that are also shared by myself. These include "There should be laws past that makes it the responsibility of the supplier to make sure the produce is cleaned to acceptable levels before it hits the shelves" And "A blanket ban on pesticides will only hurt those least able to secure alternative foods" My opinion on this topic is that of an environmentalist, but also someone who understands all sides of the arguments. Why should we harm our selves with toxic chemicals? In addition, if we did not use chemicals we would almost certainly be starving. Moderation is the key to the human races survival. Use the chemicals to kill most of the pests, but introduce biological agents to keep outbreaks from occurring this will decrease bioaccumulation, which intern will start dwindling numbers of species from becoming extinct. ...read more.