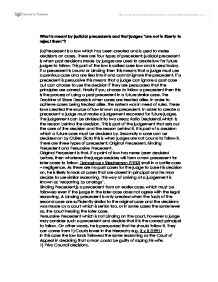 What is meant by judicial precedents and that judges "are not in liberty to reject them"? (a)Precedent is a law which has been created and is used to make decisions on cases. There are four types of precedent; judicial precedent is when past decisions made by judges are used to create law for future judges to follow. This part of the law is called case law and is used today. If a precedent is bound or binding then this means that a judge must use a previous case and are tied into it and cannot ignore the precedent. If a precedent is persuasive this means that a judge can ignore a past case but can choose to use the decision if they are persuaded that the principles are correct. Finally if you choose to follow a precedent then this is the process of using a past precedent in a future similar case. The Doctrine of Stare Decesis is when cases are treated alike. In order to achieve cases being treated alike, the system was in need of rules. These laws created the source of law known as precedent. In order to create a precedent a judge must make a judgement recorded for future judges. The judgement can be divided into two areas; Ratio Decidendi which is the reason behind the decision. ...read more.

When judges "are not at liberty to reject them" this means that the judges don't have the right to dismiss the precedent regardless of their place in the hierarchy. There are quite a few advantages and disadvantages of the precedent procedure. Starting with advantages which Provides certainty in law, that Judges have clear cases to follow, and how Lower courts follow higher courts. It also leads to an orderly development of the law. Only the Lords can overrule it's previous decisions and the hierarchy of the courts ensures that lower courts follow higher courts. Case law of real situations - viable statute law and therefore rule and principles are derived from everyday life. This means that it should work effectively and be intelligible. Where unwelcome developments take place. The law can develop. There is flexibility especially since 1966. Look at the law on intention has changed since 1970, but also when Lords feel that change is leading to uncertainty again and to save time - avoids unnecessary litigation. But from all this precedent also has its downfalls/disadvantages. There are so many cases that it is hard for judges to find relevant cases and the reasoning may not be clear. Case law can only change if a real case is brought. ...read more.

Whereas they believed it was good because in cases there may be a very good reason to change the law. My final decision would be to distinguish the case. As the "cape of good hope" case has a variation of facts from the twins case. The ratio is that they wouldn't survive without doing so by eating the cabin boy. This is much different from the twins case as the hospital was doing what was right but for the greater good, they didn't want one of the twins to die, they thought doing so would prevent the other twin from having a difficult childhood this how is showing a more humane way of coming to the decision of taking a life compared to how the cabin boy was alone and was obviously killed and eaten by the others just because they were hungry. The cabin boy had rights to die civilly and the people who killed him, if death was upon them should've died willingly and honourably with him. As the facts are similar in taking lives but are different overall as the judge I can choose to follow it or not, but as the judge personally, I would create a new precedent for future cases to follow, making sure this would not be misconstrued in future cases with reference to this previous case. ...read more.

Summary
This is a generally accurate outline of the system of judicial precedent and discusses some of the ways the courts can avoid a binding precedent. The question set does not specifically require a discussion of advantages and disadvantages of the system of precedent.
Rating: ****