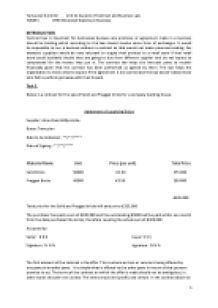 ï»¿Temuulen Od-Ochir Unit 21 Aspects of Contract and Business Law 726073 BTEC Extended Diploma in Business INTRODUCTION Contract law is important for businesses because any promises or agreement made in a business should be binding which according to the law should involve some form of exchanges. It would be impossible to run a business without a contract as that would not make promises binding. For example: suppliers would be very reluctant to supply their product to a retail store if that retail store could suddenly decide they are going to buy from different supplier and do not expect to compensate for the money they put in. The contract law helps the innocent party to recover financially given that the contract has been performed as agreed by them. The law helps the organisation to know what to expect if the agreement is not carried and the law doesn’t allow those who fail to perform get away with their breach. Task 1 Below is a contract for the sale of Solid and Frogged bricks for a company building house. Agreement of supplying Bricks Supplier: Amersham &Wycombe Buyer: Temuulen Date to be delivered : **/**/**** Date of Signing : **/**/**** Material Name Unit Price (per unit) Total Price Solid Bricks 50000 £3.50 175.000 Frogged Bricks 60000 £2.50 150.000 £325.000 Total price for the Solid and Frogged bricks will amount to £325,000 The purchaser has paid a sum of £320,000 and the outstanding; £5000 will be paid within one month from the date purchased the bricks, therefore covering the whole sum of £325,000 Accepted by: Seller: £ £ ...read more.

Scenario 2 Ben’s second item is put up for sale by the auctioneers. It is an antique writing desk, used by Napoleon Bonaparte when drawing up plans for his battles. After some initial bidding by several interested people, the auctioneer settled on the bid of Mrs. Hamilton, who was particularly fond of the desk as it reminded her of a dear friend who had since passed away. Her final bid was £5000. Monsieur Nielsen, a specialist in antiques of the Napoleonic period, arrived too late to bid on the desk and was bitterly disappointed. He had travelled some distance to but the piece which he knew was worth at least £9000. Mrs. Hamilton arrived at the cash desk shortly afterwards. She was told that unfortunately, because Ben King had received an offer of £7000 for the desk from Monsieur Nielsen he had decided to sell it to him instead. In the case of the second item, Mrs. Hamilton had the highest bid offer when the auctioneers gavel fell. She offered £5000 for the writing desk and the auctioneer accepted therefore binding the contract between the two parties. At this point Ben and Mrs. Hamilton both have the capacity to perform their parts of the contract and have the contract. At this point Ben cannot pull out of the contract and cannot make a counter offer because these don’t happen at auctions. He has to sell his item to the highest bidder present at the auction. ...read more.

The offer is valid when Alex receives it. Alex sent his acceptance back before he received Andy?s revocation. The acceptance was valid, forming a binding contract as soon as it was posted. A revocation is not valid until it is received, so it was not valid before the contract had been formed 2nd contract Marks case Andy once again posted a letter to Mark, another potential manager. Mark received the letter but he didn?t accept the offer, he instead put in a counter offer because he asked ?will you pay me a bonus if I get the team to the top of the league next season?? this is a counter offer and not an acceptance of the offer. Therefore when Andy says to Mark that it?s too late ?he has already accepted it in the letter? Andy is in the wrong because the letter received by Andy from Mark was not letter of acceptance, but a letter with a counter offer and this means that mark has the right to not accept the job if he knew he wasn?t first choice. Therefore in Alex?s case Andy has not breached any contract because no contract was formed because he revoked his offer, however he is wrong for assuming that mark accepted his offer because what he received in the post wasn?t an acceptance letter but was a letter stating a counter offer. Alex can take Andy to court as he isn?t giving him the job that he offered him in the first place, so Alex can get his damages; and Andy cannot take action against Mark as no contract was formed ...read more.