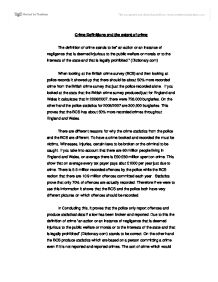 Crime Definitions and the extent of crime

Crime Definitions and the extent of crime The definition of crime stands to be" an action or an instance of negligence that is deemed injurious to the public welfare or morals or to the interests of the state and that is legally prohibited." (Dictionary.com) When looking at the British crime survey (BCS) and then looking at police records it showed up that there should be about 50% more recorded crime from the British crime survey that just the police recorded alone. If you looked at the stats that the British crime survey produced just for England and Wales it calculates that in 2006/2007, there were 726,000 burglaries. On the other hand the police statistics for 2006/2007 are 300,500 burglaries. This proves that the BCS has about 50% more recorded crimes throughout England and Wales. There are different reasons for why the crime statistics from the police and the BCS are different. To have a crime booked and recorded the must be victims, Witnesses, injuries, certain laws to be broken or the criminal to be caught. ...read more.

The sort of crime which would have to committed would be something like theft from a vehicle and burglary. The statistics also support crimes like, for example if a person was to leave open their car door and someone nicked their car radio the police may say hat it is their own fault because they left the car unlocked, although it is still a crime because someone took something without permission. Therefore this would explain higher statistics in the BCS than the police. As you can see there is a difference between the BCS statistics and the police statistics. There are several ways in which the public can report crimes to the police such as, in person (at their local or central police station or directly to a police), by telephone (the public can contact the police station at there local station) and online (for non emergency crimes). A large proportion of crime is not reported so it is considered to be 'invisible'. This is where the victim is not aware that a crime has been committed toward them. ...read more.

The police and BCS both use different ways to collect the data. The police would use quantitative data that is built on real figures, facts and recorded crimes, while the BCS would go round house to house and use the data from what they get from peoples opinion, which is only built on facts and estimates. The BCS only 'paint a picture' of how much crime there is, while the police have true figures. Overall, they both have negative side to the way they collect their data. The police cannot actually create an accurate picture of how much crime there is because they only use the recorded crime to put into statistics. In addition, the police and the BCS use different categories to put crime into. For example, for theft from a vehicle, the police would put it down as just burglary and the BCS would specify it more. Therefore, that is why most statistics will have the use of both the police and the BCS, which Is able to create a more accurate picture of how much crime there is in England and Wales. ...read more.