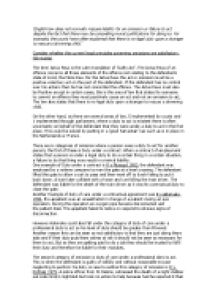 English law does not normally impose liability for an omission or failure to act despite the fact that there may be compelling moral justifications for doing so. For example, the courts have often explained that there is no legal duty upon a stranger to rescue a drowning child. Consider whether the current legal principles governing omissions are satisfactory (50 marks)

﻿?English law does not normally impose liability for an omission or failure to act despite the fact that there may be compelling moral justifications for doing so. For example, the courts have often explained that there is no legal duty upon a stranger to rescue a drowning child.? Consider whether the current legal principles governing omissions are satisfactory (50 marks) The term Actus Reus is the Latin translation of ?Guilty Act?. The Actus Reus of an offence concerns all those elements of the offence not relating to the defendants state of mind, the Mens Rea. For the Actus Reus the act or omission must be a positive voluntary act on the part of the defendant. If the defendant has no control over his actions then he has not committed the offence. The Actus Reus must also be Positive except in certain cases; this is the area of law that states for someone to commit an offence they must positively cause an act and not an omission to act, The law also states that there is no legal duty upon a stranger to rescue a drowning child. On the other hand, as there are several areas of law, 5 implemented by courts and 1 implemented through parliament, where a duty to act is existent ...read more.

The woman with whom D had been living had four other children and was of subnormal intelligence. D stated that he had told her to take the child to the doctor, but she had not done so because she was afraid that the child would be taken into care. The defendant was charged with manslaughter and wilful neglect contrary to s.1 (1) of the Children and Young Persons Act, 1933. Many statutory offences that can be completed by omission are also strict liability (no Mens Rea) for example the Road Traffic Act 1988 states that the refusal to take a breath test is a criminally liable offence. Duty under a statute can be seen as harsh on the defendant as it means they can be easily prosecuted. However this category of omission closes a loophole in the law and therefore allows for more moral prosecution. It also protects the most vulnerable. The fourth category of omission is Duty owed because of a special relationship. English law clearly imposes on parents/ guardians a legal duty to safeguard both the health and the welfare of their children; failure to do this can often result in criminal liability for the parent or guardian. ...read more.

The case of R v Khan & Khan 1998 was when The two appellants sold heroin to a 15 year old girl at their flat. This was the first time she had used heroin and she used twice the amount generally used by an experienced user. She took the heroin in the presence of the appellants. She fell into a coma and the appellants left the flat leaving the girl alone when it was clear that she required medical assistance. After viewing this case the Court of Appeal had to quash convictions due to the judge misdirecting the jury in the crown court however they stated that the law was capable to cover more categories. If the Law was expanded it would mean that less people would escape liability. It would also develop the law and demonstrate a move to a more moralistic society. However it could lead to inconsistency in the law and uncertainty in the law. In Conclusion the UK legal system could also introduce a Good Samaritan law whereby strangers owe a duty of care and makes it an offence to not act in some situations. This could be argued against as it could put more people at risk that need not be at risk; On the other hand it may save many lives e.g. a ?drowning child?. ...read more.

Summary: the description of the ways in which a failure to act can bring criminal liability is accurately set out and supported by relevant case authority. The arguments in favour of reforming the law are insufficiently developed and the question is not fully addressed.
Rating: ****