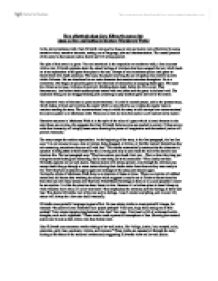 How effectively does Gary Kilworth convey his Ideas on law and justice in his story Murderers Walk?

How effectively does Gary Kilworth convey his Ideas on law and justice in his story Murderers Walk? In the story murderers walk, Gary Kilworth conveys his ideas on law and justice very effectively by using narrative voice, narrative structure, setting, use of language, plot and characterisation. The central premise of this story is that natural justice should and will always prevail. The plot of this story is a game. You are introduced in the exposition to murderers walk, a free city state with no law. Kilworth explains about the elated feelings of criminals that have escaped the law, which leads on to an explanation of the game they play in the inns. Groups of nine murderers play a card game to decide their own death sentences. The loser, the player receiving the ace of spades must commit suicide within 24 hours. We are introduced to our main character that remains nameless throughout. He is a newcomer, who begins to play the game to feel that rush of adrenaline at escaping death again. We reach the climax as he loses. 24 hours of pure h**l, thinking about death, before his life is over. Then denouement, just before death another player enters with two jokers and the game is declared void. ...read more.

During the whole of Murderers Walk there is no mention of dates or times. There is a mention of cobbled streets and old houses that overhang the alleys which suggests it may be set in Tudor or Stuart times but then there are still many streets now that have Tudor/Stuart buildings in them so it is quite possible it could be set anytime. It is like the place has been frozen in time. Because it's a lawless place it doesn't keep up with everyone else's time, it's a law unto itself. This emphasises the eeireness and the feelings of terror and fear. This shows Kilworths view of the law and its failings. It can't control everything, and it never will, nature will always be a law unto itself eventually. Kilworths uses powerful language to great effect. He uses strong words to create powerful images, for example "the pallor of your distended face: purple perhaps? Your eyes, huge b***s easing out of their sockets? Your tongue hanging long between blue lips? You weep. Your head is full of a thousand active thoughts, each one a nightmare." These words create a powerful atmosphere of fear. Showing how natural justice can be just as bad, worse even than human laws. ...read more.

The place is empty of emotions yet at the same time full of them. The limited usage of characterisation makes the place seem hostile and uncaring which simply re-emphasises that natural justice is just as bad as human law and that justice will always prevail. Gary Kilworth conveys his ideas on law and justice effectively from the beginning to the end of the story. He uses many words throughout Murderers Walk relating to law and justice, such as execution, guilt and death. He uses narrative voice in an unconventional way. He directly involves the reader by using second person, drawing them into the dark, dank, terrifying underworld of criminals. He structures the story like the rules of game, like societies rules, except they've created their own. He creates a hostile setting which is very effective in proving his point that natural justice can be worse than government law. He effectively puts across that natural justice will prevail. He blends a mix of menacing pictures and dark meanings to show everything resolves itself in the end. Although the justice is very unconventional, the criminals in the story get what they really deserve in many ways. Their torment forces them to try and cheat death until they are released by death. So in Murderers walk, Kilworth shows an innovative and effective way to show that justice finds its own way in the end. ...read more.