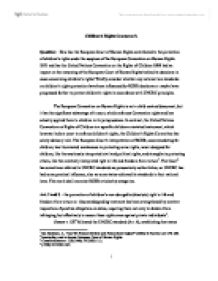 Children's Rights Coursework Question: How has the European Court of Human Rights contributed to the protection of children's rights under the auspices of the European Convention on Human Rights 1951 and has the United Nations Convention on the Rights of Children 1989 had an impact on the reasoning of the European Court of Human Rights behind its decisions in cases concerning children's rights? Briefly consider whether any national law standards on children's rights protection have been influenced by ECHR decisions or maybe have progressed further to protect children's rights in accordance with UNCRC principles. The European Convention on Human Rights is not a child-centred document, but it has the significant advantage of a court, which enforces Convention rights and has actually applied them to children in its jurisprudence. In contrast, the United Nations Convention on Rights of Children is a specific children-orientated instrument, which however lacks a court to enforce children's rights; the Children's Rights Committee has solely advisory role. The European Court's interpretation of ECHR, accommodating for children, has illuminated weaknesses in protecting some rights, never designed for children, like the cautiously interpreted civil and political rights, and strengths in protecting others, like the creatively interpreted right to life and freedom from torture1. The Court2 has sometimes referred to UNCRC standards as persuasively authoritative, so UNCRC has had some practical influence, also as some states achieved its standards in their national laws. This work shall examine ECHR articles by categories. Art. 2 and 3 - the promotion of children's non-derogable (absolute) right to life and freedom from torture or inhuman/degrading treatment has been strengthened by creative imposition of positive obligation on states, requiring them not only to abstain from infringing, but effectively to secure these rights even against private individuals3. Osman v. UK4 followed the UNCRC standard (Art. 6), establishing that states must do everything possible to safeguard child's life, even if interfering with parent's family/private life, where parents' actions may endanger child's life. ...read more.

Regarding identity, the position in Gaskin v. UK78 that private life entailed right to information about oneself to understand childhood and development resembled right to identity, before UNCRC (Art. 8) came into being. This case was one of important stages in securing special right in UK by Data Protection Act 1998, just as Sutherland v. UK79 was in leading to s****l Offences (Amendment) Act 2000, which shows Court's constructive influence on national laws. Unfortunately, as a string of cases like X, Y & Z v. UK80 have shown, identity rights separately, like registration of father, were not guaranteed, which was consistent with European legal trend81; Kilkelly views Court's reasoning82 as poor in light of many complex legal and moral rights issues83. There is indeed ground to criticise inadequate response to children's identity rights along UNCRC standards84. Some Court's decisions reflected on importance of protecting child's right to physical and psychological integrity. While in X and Y v. Netherlands85 this was realised by imposing positive state obligation to have laws in place to enable compensation of mentally disabled, s******y assaulted girl, other cases have emphasised an implicit in Art. 8 right to health care86. On national plane, France's, Italy's and Sweden's measures on Art. 24 UNCRC diminishing child mortality have been more successful than UK's, while French legislation on female genital mutilation has worked more effectively than UK's87. A similar novel development in Art. 8 (respect for private life and home) right can be seen in Court's decision in Lopez Ostra v. Spain88 that right to healthy environment is implicit and that a state is liable for risks to child's health caused by pollution. Last, but not least, as established in non-child case Niemietz v. Germany89 and later elaborated in Botta v. Italy90, right to private life entails establishing and developing relationships with human beings. This has been recently applied to children in Pretty v. United Kingdom91 in the context of their participation in community life and access to social, recreational and cultural activities. Art. ...read more.

14 ECHR141, which cannot be claimed alone, rather its effect is limited to Convention articles; Throughout 1990's, Denmark, for example, has failed on 'non-discrimination' (UNCRC, Art. 2), particularly in relation to refugee children142. Very importantly, a state is not bound however to educate disabled children in mainstream schools at parents' wish due to policy arguments143 and the Court has stressed in Dahlberg v. Sweden144 that neither can Convention authorities assess standard of special facilities, for example for disabled children. So, in McIntyre v. UK145 failure to install lift for disabled child in normal school did not deny her right to education, because effective education had been secured by other arrangements and her individual right had to be balanced with other considerations. It is submitted that this development of child's education right is reasonable and does not detract too far from UNCRC standards - Art. 28, 30 - however lack of procedural rights (Art. 6) in suspension or exclusion, like appeal, is a serious lacuna146, as is indeed in English law147; England actually fails on Art. 28 "equal opportunity" standard experiencing problem with increasing exclusions148. The Court may be allowing too much discretion to states in adequate resources and manner of education. It is wished that cases like Valsamis and Campbell & Cosans shall be scrutinised more by the Court as they are clashing with children's other rights as interpreted under Convention, which the Court has not reconciled satisfactorily enough. Children's rights in the Court have overwhelmingly been balanced with families' and states' rights for purposes of proportionality. Children have been accommodated for, sometimes along UNCRC standards, but not given full autonomy; the rights have been kept within adults' notion often to suit states' needs. Some national laws have enforced children's rights further along UNCRC standards after Court's influential relatively creative tailoring of ECHR to suit children. This resulted in inconsistency between national and ECHR law. The increasing use of UNCRC to expand children's rights' scope is a fact. The exact effect of UNCRC against ECHR framework is arguable. ...read more.