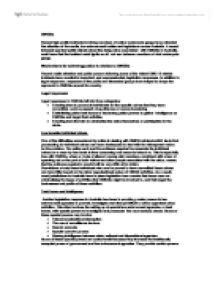 How the Lawe in Australiacan be used to combat the problems caused by Motorcycle Gangs.

OMCGs Recent high profile incidents involving members of outlaw motorcycle gangs have attracted the attention of the media, law enforcement bodies and legislators across Australia. A recent indecent sparked public debate about the rising crime associated with OMCGs in Australia, amid fears that the incident could ignite an all-out war between members of rival motorcycle gangs. Mechanisms for achieving justice in relation to OMCGs Recent media attention and public concern following some of the violent OMCG related incidents have resulted in important, and unprecedented, legislative responses. In addition to legal responses, responses of the public and interested groups have helped to shape the approach to OMCGs around the country. Legal responses Legal responses to OMCGs fall into three categories: * Enacting laws to prosecute individuals for the specific crimes that they have committed, such as assault, drug offences or money laundering * Establishing police task forces or increasing police powers to gather intelligence on OMCGs and target their activities * Enacting laws that aim to criminalise the clubs themselves or participation in the clubs Law targeting individual crimes One of the difficulties encountered by police ...read more.

This often involves the setting up of special law enforcement agencies, or task forces, with special powers to investigate and prosecute the more serious crimes. Some of these special powers may involve: * Telecommunications interception * The use of surveillance devices * Search warrants * Special coercive powers * Sharing intelligence between state, national and international agencies Some of these special powers are controversial because they increase the traditionally accepted power of government and law enforcement agencies. They provide certain powers to police, such as coercive powers to compel witnesses to give evidence that are normally held only by the courts. Then these powers are allowed, they will usually require a high degree of oversight to ensure they are not abused. Such laws raise important issues about the separation of powers. Due to reported increases in OMCG activity in recent years, in 2006 the Australian Crime Commission recognised OMCGs as a high risk crime group and established the OMCG National intelligence Task Force to investigate OMCG membership and activities and established national policies to address the issues. ...read more.

These included: * Increase penalties for activities related to organised crime * Increase power for police to apply for search and seizure warrants * New offences for recruiting another person to carry out or assist in criminal activity * The introduction of offences for knowingly participating in a criminal organisation Immediately following the Zervas murder, NSW Premier Nathan Rees introduced new laws claimed to be tougher than South Australia's and rapidly passed a new Act through parliament to deal more specifically with OMCGs: the Crimes Act 2009 (NSW) Non legal responses Media and politics Media coverage, and the ability of media reports to shape public opinion, has played a crucial part in political responses to OMCGs. Violent incidents related to OMCGs are widely covered by the print and broadcast media, and politicians are often keen to reassure the public that they are being tough on crime. This is most evident in the rapid response of the NSW government, following the Sydney Airport murder, to strengthen organised crime laws. The media have enabled public discussion of the advantages and drawbacks of the laws being propose, and they have the power to influence the way the issues are dealt with by legislatures and the police. ...read more.