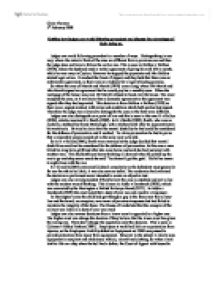 Outline how judges can avoid following precedent and discuss the advantages of their doing so. Judges can avoid following precedent is a number of ways. Distinguishing is one way, where the material facts of the case are different from a previous one and then the judge does not have to follow the earlier one. This is seen in Balfour v Balfour (1919), where the husband made a verbal agreement of giving his wife �30 a month, while he was away in Ceylon. However he stopped the payments and Mrs Balfour started legal action. It reached the Court of Appeal and they held that there was no enforceable agreement, as there was no evidence for a legally binding promise. So when the case of Merritt and Merritt (1970) came along, where Mr Merritt and Mrs Merritt signed an agreement that he would pay her a monthly sum. When the mortgage of the house was paid, Mr Merritt refused to hand over the house. ...read more.

In this case a man killed his long term girlfriend after she came home and said she had just slept with another man. This had both been heavy drinking all day and when he picked up the axe to go and chop some wood she said 'You haven't got the guts'. He hit her seven to eight times with the axe. R v G and R (2003) overruled Caldwell completely as the defendant must generally for see the risk to be liable, it was also seen as unfair. The academics had criticised the decision as parliament never intended to create an objective test. Judges can also avoid precedent if they believe the case is outdated and not in line with the modern way of thinking. This is seen in Addie v Dumbreck (1929), which was overruled by the Herrington v British Railways Board (1972). In Addie v Dumbreck (1929) the court ruled that a duty of care was not owed to a trespasser. ...read more.

Advantages of judges being allowed to avoid precedent is certainty. A lawyer can provide a client with reasonable information as they know previous decisions that the judges have given and it makes the law very accessible to people as they know that decisions can't change, although there are some exceptions. The House of Lords' Practice Statement points out how important certainty is. There is also consistency and fairness in the law as it applies to everyone, what ever background they are. The law must be seen to be working consistency and credible. Precision is very important as cases are used as evidence and therefore the law becomes very precise. Flexibility is useful as the Practice Statement can be used by the House of Lords to overrule cases, which allows the law to develop and avoid bad past decisions. It also saves times as if no precedents were created then every case would go to the House of Lords. Lower courts can apply the precedent, which makes the law cheap and saves lengthy the process of litigation. ?? ?? ?? ?? Claire Thomas 5th February 2008 ...read more.

Summary
A generally accurate account of some methods of judges avoiding precedent. However more could be made of the 1966 Practice Statement and the powers of the Court of Appeal. There is one advantage discussed.
Rating: ***