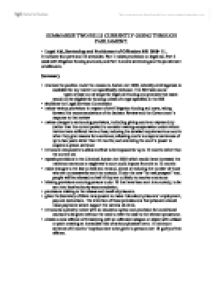 SUMMARISE TWO BILLS CURRENTLY GOING THROUGH PARLIAMENT. � Legal Aid, Sentencing and Punishment of Offenders Bill 2010- 11. It includes four parts and 16 schedules. Part 1 makes provisions on legal aid, Part 2 deals with litigation funding and costs, and Part 3 covers sentencing and the punishment of offenders. Summary � reverses the position under the Access to Justice Act 1999, whereby civil legal aid is available for any matter not specifically excluded. The Bill takes some types of case out of scope for legal aid funding and provides that cases would not be eligible for funding unless of a type specified in the Bill � abolishes the Legal Services Commission � makes various provisions in respect of civil litigation funding and costs, taking forward the recommendations of the Jackson Review and the Government's response to that review � makes changes to sentencing provisions, including giving courts an express duty (rather than the current power) ...read more.

� provisions relating to the release and recall of prisoners. � gives the Secretary of State new powers to make rules about prisoners' employment, pay and deductions. The intention of these provisions is that prisoners should make payments which support the victims of crime. � introduces a penalty notice with an education option and provision for conditional cautions to be given without the need to refer the case to the relevant prosecutor. � creates a new offence of threatening with an offensive weapon or object with a blade or point creating an immediate risk of serious physical harm. A minimum sentence of 6 months' imprisonment to be given to persons over 18 guilty of this offence. � European Union Act 2011 (Amendment) Bill 2010-11 The Bill is expected to have its second reading debate on 21st October 2011. The first reading was the 7th September 2011, there was no debate. ...read more.

certain surveillance activities by local authorities � provides for a code of practice to cover officials' powers of entry, with these powers being subject to review and repeal � outlaws wheel-clamping on private land � introduces a new regime for police stops and searches under the Terrorism Act 2000 and reduces the maximum pre-charge detention period under that Act from 28 to 14 days � restricts the scope of the 'vetting and barring' scheme for protecting vulnerable groups and makes changes to the system of criminal records checks � enables those with convictions for consensual s****l relations between men aged 16 or over (which have since been decriminalised) to apply to have them disregarded � extends Freedom of Information rights by requiring datasets to be available in a re-usable format � repeals provisions (never brought into force) which would have allowed trial without a jury in complex fraud cases � removes time restrictions on when marriage or civil partnership ceremonies may take place. ...read more.