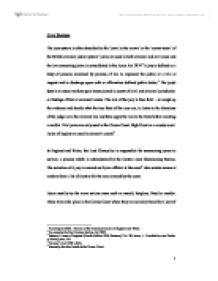 Jury System The jury system is often described as the 'jewel in the crown' or the 'corner-stone' of the British criminal justice system1 Juries are used in both criminal and civil cases and the law concerning juries is consolidated in the Juries Act 19742 A jury is defined as a body of persons convened by process of law to represent the public at a trial or inquest and to discharge upon oath or affirmation defined public duties.3 The jury's duty is to return verdicts upon issues joined in courts of civil and criminal jurisdiction or findings of fact at coroners' courts. The role of the jury is four-fold: - to weigh up the evidence and decide what the true facts of the case are, to listen to the directions of the judge as to the relevant law and then apply the law to the facts before reaching a verdict. Trial juries are only used in the Crown Court, High Court or a county court. Juries of inquiry are used in coroner's courts4 In England and Wales, the Lord Chancellor is responsible for summoning jurors to service, a process which is administered by the Central Juror Summoning Bureau. ...read more.

person is incapable of acting effectively as a juror on account of a physical disability.13 A judge may also discharge any juror or even the whole jury, to prevent scandal or the perversion of justice.14 Jury service is compulsory and failure to attend is considered contempt of court and can result in a fine.15 Similarly, it is an offence to publish or solicit for publication details of what happens in a jury room.16 In the civil court, the Supreme Court Act 1981 gives a qualified right to jury trial in four types of cases - libel and slander, malicious prosecution, false imprisonment and fraud. In civil cases the jury will decide whether the case has been proved and the amount of damages to be awarded. In the Coroner's Court a jury must be used to inquire into deaths which have occurred in prison or police custody, in an industrial accident or in circumstances where public health and safety is involved. Juries must be duly empanelled and returned17 and individual jurors or the complete jury may be challenged by the accused or by the Crown but only before the jurors are sworn. ...read more.

Here the Court of Appeal (Criminal Division) heard together three separate appeals as each defendant had raised issues as to the composition of the jury at their respective trials. Objection had been taken to the inclusion on the jury of two serving police officers and to a juror who had been employed as a prosecuting solicitor by the Crown Prosecution Service. Dismissing the appeals, the Court held that police officers, members of the prosecution service or other persons involved in the administration of justice, including judges, should not automatically be regarded as being disqualified because of their occupation. Provided they had no personal knowledge of the defendant or others involved in the trial, they could in their capacity as a citizen be expected to comply with the terms of their oath and the directions which the judge would give them. 11 Subject to the Juries Act 1974 s 9A (1A) (as added) and s 9A(2). 12 Juries Act 1974 s 9(3) 13Juries Act 1974 s 9B 14 Elliot C. and Quin F. (2002) English Legal System, Chap. 5 The Jury System, p 160, Pearson Education Limited 15 Juries Act 1974 s20(1) 16 Contempt of Court Act 1981 17 County Court Act 1984 s67 18 Halsury's Laws of England (Fourth Edition 2004 Reissue), Vol. 26, Juries, 1. Constitution and Duties of Juries, para. 548 ?? ?? ?? ?? 1 ...read more.