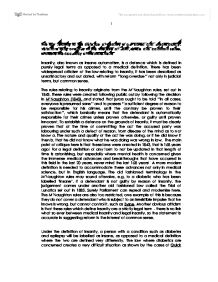 The law relating to the defence of insanity is out dated and unsatisfactory. Reform is long overdue in the interests of both justice and common sense. Evaluate the accuracy of this statement.

The law relating to the defence of insanity is out dated and unsatisfactory. Reform is long overdue in the interests of both justice and common sense. Evaluate the accuracy of this statement. Insanity, also known as insane automatism, is a defence which is defined in purely legal terms as opposed to a medical definition. There has been widespread criticism of the law relating to insanity, it has been described as unsatisfactory and out dated, with reform ''long overdue'' not only in judicial terms, but common sense. The rules relating to insanity originate from the M'Naughton rules, set out in 1843. These rules were created following public outcry following the decision in M'Naughton (1843), and stated that jurors ought to be told ''in all cases, everyone is presumed sane'' and to possess ''a sufficient degree of reason to be responsible for his crimes, until the contrary be proven to their satisfaction'', which basically means that the defendant is automatically responsible for their crimes unless proven otherwise, or guilty until proven innocent. To establish a defence on the grounds of insanity, it must be clearly proven that at the time of committing the act the accused party was labouring under such a defect of reason, from disease of the mind as to not know a. The nature and quality of the act he was doing, or if he did know it then b. ...read more.

Hennessy was another diabetic, who did not take his insulin for a period of 3 days. He was seen getting into a car that was reported stolen and drove off, but had no recollection of this. Hennessy pleaded guilty because he didn't want to be innocent through insanity. On his appeal, where he felt he should have been allowed to use non insane automatism, this was rejected by the Court of Appeal because diabetes was affecting his mind, and therefore was classed as insane. Quick was acquitted because his seizure was triggered by the external factor of not eating, however Hennessy's seizure was triggered by an internal factor, his diabetes. This is inconsistent and the same rule should be applied to anyone who is diabetic. Anyone who is found not guilty by reason of insanity would usually be referred to a mental institution, which more than explains why some people, such as Hennessy, did not want to use the defence. The medical definitions of insanity and diabetes are very far apart and this should be reflected in the law to stop injustices like this. Even the judges are uneasy about declaring conditions such as this 'insane'; LJ Lawton in Quick stated that ''common sense is affronted by the prospect of a diabetic being sent to a hospital when in most cases the situation can be rectified with a lump of sugar''. ...read more.

As the laws of insanity have been criticised for so many years and has been widely described as out dated, the statement is correct in acknowledging that the defence of insanity needs to be updated in the interest of common sense as well as in a judicial sense. Ordinary people with no medical knowledge are being forced to make a medical decision, based on rules where the definition is completely legal and ignores all medical terminology relating to mental health. Declaring someone as 'insane' is not an easy decision for a jury to make at the best of times. A jury may be so revolted by the crimes of the accused that they will not even consider finding him 'not guilty', even if it is by reason of insanity(Peter Sutcliffe aka the Yorkshire Ripper is a perfect example of this). Parliament can learn from other nations such as Canada who have already modernised their law relating to insanity, but they can also simply apply some common sense. The amount of advances in the field of mental health even since the 1990's is astonishing, which is widely agreed upon, so why the law of insanity relying on a legal definition set over 160 years ago? Insanity deserves a medical definition, and a vast update in the interests of both justice and common sense, and the statement is correct in acknowledging this. ?? ?? ?? ?? 1 ...read more.