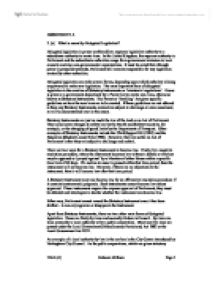 What is meant by Delegated Legislation?

ASSIGNMENT A 2. (a) What is meant by Delegated Legislation? Delegated legislation is power conferred by a supreme legislative authority to a subordinate authority to create laws. In the United Kingdom, the supreme authority is Parliament and the subordinate authorities range from government ministers to local councils and also non-governmental organisations. It must be noted that although power is passed downwards, Parliament still remains responsible for any legislation created by other authorities. Delegated legislation can take several forms, depending upon which authority is being empowered to make new legislation. The most important form of delegated legislation is the creation of Statutory Instruments or 'ministerial regulations'. Power is given to a government department by a Parent Act to create new laws, otherwise known as Statutory Instruments. The Parent or 'Enabling' Act gives specific guidelines on how the new laws are to be created. If these guidelines are not adhered to then any Statutory Instruments created are subject to challenge or even annulment, as will be demonstrated later in this essay. ...read more.

Either way, Parliament cannot amend the Statutory Instrument once it has been drafted - it can only approve or disapprove the Instrument. Apart from Statutory Instruments, there are two other main forms of delegated legislation. These are firstly by-laws and secondly Orders in Council. By-laws are laws created by a local authority or by a public corporation. Most local by-laws are passed under the Local Government (Miscellaneous Provisions) Act 1982 or the Local Government Act 1972. An example of a local authority by-law is the car ban in the City Centre introduced by Nottingham City Council. As for public corporations, which are given statutory authority, they could range from a no-smoking policy in trains under the Railways Act 2005 to rules about the election of shareholders in a company under the Companies Act 2006. Unlike Statutory Instruments, by-laws are not subject to direct Parliamentary control. However, they must be approved by the relevant Minister to become law. Orders in Council are laws passed in an emergency in the absence of Parliament. ...read more.

If the legislation is dismissed as not valid, it will either be on the grounds of procedural ultra vires or substantive ultra vires. In the first instance, the method of creating the legislation is alleged to be invalid. See for example THE AYLESBURY MUSHROOMS CASE [1972]. In the second instance, the content of the legislation is found to be invalid. In Staden v. Tarjanyi 1980, a local by-law making it illegal to fly a glider 'in the pleasure ground' was condemned as substantively ultra vires because the content was found to be uncertain - it was debatable whether the law meant 'in' or 'over' the pleasure ground. It must be stressed that although Parliament has delegated power to other authorities, the responsibility for the laws these authorities create still remains with Parliament. Therefore Parliament is keen to monitor all delegated legislation since it would have to take the blame should any problems arise. Despite this constant supervision, however, the system is still far from perfect and many intelligent people object to the perhaps excessive and confusing volume of delegated legislation which exists in this country. ?? ?? ?? ?? TMA (A) Rebecca Milburn Page 1 ...read more.