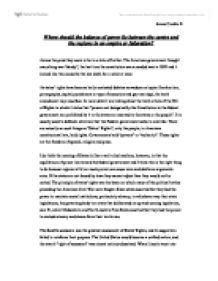 Where should the balance of power liebetween the centre and the regions in an empire or federation?

Where should the balance of power lie between the centre and the regions in an empire or federation? Across the pond they seem to be in a state of bother. The American government thought everything was "dandy", the last time the constitution was amended was in 1992 and it looked like this would be the last draft; for a while at least. As states' rights have become hotly contested debates nowadays on topics like abortion, p*********y, capital punishment or type of execution and gay marriage, the tenth amendment may resurface. In more detail I am talking about the tenth article of the Bill of Rights in which it states that "powers not delegated by the Constitution to the federal government nor prohibited by it to the states are reserved to the states or the people". ...read more.

the governing body in a state that deliberated on up-and-coming legislation, saw fit, while Midwestern and North-eastern Free States asserted that they had the power to exclude slavery and slaves from their territories. The South's secession was the greatest assessment of States' Rights, and its supporters failed to reinforce their purpose. The United States would become a unified nation, and the state's "right of secession" was almost entirely dissolved. When Lincoln went into power, the Republicans in the federal government and Northerners in general rallied behind the cause of the Union. Further, it was many Northerners opinion that they could not put up with a new slave nation controlling Mississippi River and the West. Many never envisioned the b****y war to come but both sides thought they were right and rejected any claims of a compromise and so took it lightly that they would have to fight for what they believe in. ...read more.

The use (or non-use) of the death penalty is currently decided by individual states. Other controversial subjects entering the states' rights debate include the authority to allow or disallow euthanasia, the authority to legalize gay marriage, and the authority to legalize medical marijuana, the last of which is in direct disobedience of current official U.S. law. Another concern is the fact that on more than one occasion, the Federal Government has threatened to not give highway funds to states unless state governments pass certain pieces of legislation. But by doing this they upset the balance between the state and Federal governments and for that reason it will be important to solve these issues at the moment and keep the balance of power in equilibrium with both parties satisfied or in the media we will see protests and marches and maybe even more terror attacks due to the anxiety and volatility of the American population. ?? ?? ?? ?? James Crosbie E ...read more.