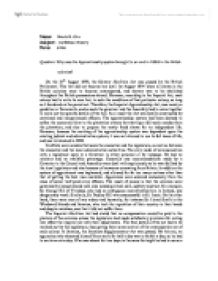 Why was the Apprenticeship system brought to an end in 1838 in the British colonies?

Name: Nicole N. Ohn Subject: Caribbean History Form: 6 LM. Question: Why was the Apprenticeship system brought to an end in 1838 in the British colonies? On the 24th August 1833, the Slavery Abolition Act was passed by the British Parliament. This Act did not become law until 1st August 1834 when all slaves in the British colonies were to become emancipated, and slavery was to be abolished throughout the British possessions abroad. However, according to the Imperial Act, each colony had to write its own Act, to suite the conditions of that particular colony, as long as it bordered on the parent act. Therefore, the Imperial Apprenticeship Act, was merely a guideline or framework, and as such the governor and the Assembly had to come together to work out the specific details of the Act. As a result the Act was hastily constructed by untrained and inexperienced officers. The apprenticeship system had been devised to soften the economic blow to the plantation owners by averting a full-scale exodus from the plantation, and also to prepare the newly freed slaves for an independent life. However, because the working of the apprenticeship system was dependent upon the existing judicial and administrative system, it was not allowed to run its full lease of life, and was terminated in 1838. Conflicts were constant between the executive and the legislature, as well as between the executive and the local administrative authorities. ...read more.

By October 1834 one stipendiary magistrate in British Guiana had died from fever, and the rest had suffered or were suffering from it. Stipendiary magistrates had no clerk or assistants and were expected to visit all the estates in his district at frequent and established intervals. The desperate loneliness of their labours, the penury of their existence, the physical strain and sheer tiredness they suffered, endangered the judicial equity of the magistrates and caused many of them to become friends of the planters. This was the case because human frailties being what they are, usually resulted in a magistrate accepting the hospitality of the planter. The result is of course that the magistrate would have no choice but to compromise his neutrality. A major disadvantage of the magistracy was that as a rule the Colonial Secretary, having difficulty finding suitable English replacements at the salary offered, confirmed local appointments. This was especially true in Trinidad where most apprentices spoke a patois French and many others spoke Spanish. Therefore, at the very least, knowledge of French was a necessary qualification for magistrates in the island, but most of the men sent out from the England could not speak the languages of the apprentices. In Jamaica, each parish possessed a Custos who was responsible for all the administrative matters of the parish. If there was a jail in parish, the primary responsibility of administration of that jail laid with the Custos. ...read more.

Domestics and tradesmen constituted a large percentage of those seeking manumission by purchase. Women were more numerous than men. In all colonies the number of apprentices who appealed for valuation was relatively low, and as the time for freedom approached, the incentive to expend one's savings to purchase a premature release diminished. The prime fault of the apprenticeship system was that it attempted an impossible compromise between slavery and freedom. It involved the continuation of many features of slavery such as forced labour, the undefined distribution of indulgences and allowances and the restricted mobility of the labour for wages and competition between employers for labour. In addition, apprentices did not work as industriously during their hours of free labour on the plantation as compared to during hours of paid labour. As a result of these occurrences, apprenticeship was not allowed to run its full lease of life. In March 1838 the Colonial Office, guided by a trinity of humanitarians, Glenelg, Stepen, and Taylor, decided that apprenticeship must go. The planters were informed that artisans (coopers, masons, carpenters and the like) were non-praedials, and so must be set free on August 1st, 1838. To work the estates without theses would be difficult. The next month the Emancipation Act was amended to give the governors and stipendiary magistrates greater powers. The colonies decided one by one to do away altogether with apprenticeship and on August 1st, 1838, 715,000 n*****s were set free. THE END ...read more.