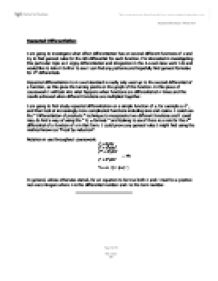 Repeated Differentiation I am going to investigate what effect differentiation has on several different functions of x and try to find general rules for the nth differential for each function. I'm interested in investigating this particular topic as I enjoy differentiation and integration in the A-Level class work I do and would like to take it further to see I can find any patterns and hopefully find general formulae for nth differentials. Repeated differentiation to A-Level standard is really only used up to the second differential of a function, as this gives the turning points on the graph of the function. In this piece of coursework I will look into what happens when functions are differentiated n times and the results achieved when different functions are multiplied together. I am going to first study repeated differentiation on a simple function of x, for example a.xb , and then look at increasingly more complicated functions including sine and cosine. I could use the " Differentiation of products " technique to incorporate two different functions and I could may be find a way of using the " R, ??formula " and looking to see if there is a rule for the nth differential of a function of x in that form. I could prove any general rules I might find using the method known as "Proof by induction". Notation in use throughout coursework: yI = dy/dx yII = d2y/dx2 yIII = d3y/dx3 ... etc. yn = dny/dxn nCr = n! / [ r! (n-r)! ] In general, unless otherwise stated, for an equation to be true both n and r must be a positive non-zero integers where n is the differential number and r is the term number. The simplest function of x to differentiate is xb . This is an example of what happens to such a function upon differentiation... start: y = x11 yI = 11x10 = 11x10 yII = 11.10x9 = 110x9 yIII = 11.10.9x8 = 990x8 yIV = 11.10.9.8x7 = 7920x7 yV = 11.10.9.8.7x6 = 55440x6 ... ...read more.