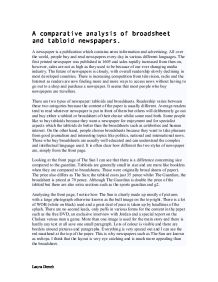 A comparative analysis of broadsheet and tabloid newspapers

A comparative analysis of broadsheet and tabloid newspapers. A newspaper is a publication which contains news information and advertising. All over the world, people buy and read newspapers every day in various different languages. The first printed newspaper was published in 1605 and sales rapidly increased from then on, however, sales are not as high as they used to be because of our ever changing media industry. The future of newspapers is cloudy, with overall readership slowly declining in most developed countries. There is increasing competition from television, radio and the Internet as readers are now finding more and more ways to access news without having to go out to a shop and purchase a newspaper. It seems that most people who buy newspapers are travellers. There are two types of newspaper: tabloids and broadsheets. Readership varies between these two categories because the content of the paper is usually different. Average readers tend to read whatever newspaper is put in front of them but others will deliberately go out and buy either a tabloid or broadsheet of their choice whilst some read both. Some people like to buy tabloids because they want a newspaper for enjoyment and for specialist aspects which the tabloids do better than the broadsheets such as celebrities and human interest. ...read more.

Reading the Guardian, it is obvious that the front page is very different to the tabloid because despite the fact that it is twice the size of The Sun, it is also made up nearly entirety of text with hardly any pictures. It is significantly less colourful than The Sun and there is only one picture accompanying the main story as well as a small image of the statue of liberty in the 'national' section. Furthermore, at the top of the broadsheet I can see the puff advertising the free designer wrapping paper that comes with The Guardian and a photograph of Louis Saha in a red strip as part f the sport corner for the Manchester United against Chelsea game. Usually there are puffs on the front page of the broadsheets and tabloids to inform readers of interesting and engaging articles inside the paper and this is evident in the bottom quarter of the page with headlines such as: 'Hain's remarks dent Russian relations,' 'Gaza cease fire holds after rocket attacks,' and 'companies protest at tax burden' I have noticed how WOB is not used here and there are much fewer photographs. I observe how both newspapers use lots of colour on their first few pages to draw readers inside. ...read more.

I think that this means that the sentences in a broadsheet are more complex and informative than a tabloid and this is proved true simply by reading one article. The sentences vary a lot in The Guardian: some are very short, others are very long but in The Sun they are all extremely short as are the articles. I have also noticed how tabloids like to use crossheads in the articles such as "shocked" or "horrified." These introduce the paragraph ahead and summarise what it is about. Overall, I can truthfully say that the paper which catches my attention the most is the tabloid: The Sun. I like the colourful layout and the use of pictures and large headlines to attract readers. On the other hand, I prefer the content of the broadsheet: The Guardian as its stories are fascinating and have been written by very good journalists as have some of the tabloids. Although celebrities and human interest is something I enjoy reading about, I prefer topics in The Guardian such as politics and international news because I find these more interesting. I think that my ideal newspaper would be set out like the tabloid and have stories on celebrity gossip, human interest as well as the fashion pages which I always enjoy reading, accompanying the stories that I can only usually find in a broadsheet. Laura Dench ...read more.