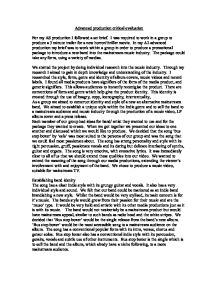 Advanced production critical evaluation For my AS production I followed a set brief. I was required to work in a group to produce a 3 minute trailer for a new horror/thriller movie. In my A2 advanced production my brief was to work within a group in order to produce a promotional package to introduce a new band into the mainstream music industry. The package could take any form, using a variety of medias. We started the project by doing individual research into the music industry. Through my research I aimed to gain in depth knowledge and understanding of the industry. I researched the style, form, genre and identity of album covers, music videos and record labels. I found all media products have signifiers of the form of the media product, and generic signifiers. This allows audiences to instantly reconigise the product. There are conventions of form and genre which help give the product identity. This identity is created through the use of imagry, copy, iconography, intertextuality, As a group we aimed to construct identity and style of a new an alternative mainstream band. We aimed to establish a unique style within the Indie genre and to sell the band to a mainstream audience and music industry through the production of a music video, LP album cover and a press release. Each member of our group had ideas for band/ artist they wanted to use and for the package they wanted to create. ...read more.

It also corresponds to the current fashions in media formats. The band itself is drawn as a very stylised cartoon We have used a number of generic signifiers to make it immediately clear to the viewers what they can expect from this media product. Firstly we have a traditional band format, with lead gatair, drummer, and bassist. The band shots are edited in a conventional way, with them being used to show the instrumental, we have a establishing/hook shot of the band playing together and pay attention to the detail of the music using close ups and extreme close-ups. The alternative nature of the music is also portrayed to the viewer by use of strange camera angles and creative movements of the camera. However, the band defies conventions by having no lead singer. There is an empty microphone in the centre of the frame. The band seems to look lost and soulless, like the character in the narrative. The clothes worn by the character and the band are very grungy, stylish and are a clear indicator to the genre of the song. The video opens with a shot of a man in bed; it is dark and clearly morning. The shot is an immediate enigma to viewers, creating questions which they need answered, this draws them into the video, making them immediately involved and intergraded with the product. The shot really gives no signifiers to what type of text this is. ...read more.

It uses the mainstream industry in two ways. Firstly, the mainstream music industry provides something to oppose. Indie bands often thrive from breaking the rules of the popular establishment, providing audiences with something which they can call their own, which is not the promoted to the mainstream. In this way the audience can feel that they are making decisions for themselves, making them feel in control of their decisions. This helps them to feel more independent, and gives them social identity. At the same time Indie bands use the mainstream to promote and sell themselves. Using the mainstream industry, Indie bands can commodify themselves through their attitudes, values, beliefs and especially their style. Tippo would be marketed to the mainstream through enigmatic, original schemes. One idea would extend the themes used on the album cover. The Tippo logo would be printed as stickers and would be stuck on roads all round the centre of London, including Oxford Street, Tottenham court road and the surrounding area as well as in and around venues. The stickers would set up an enigma, which could only be solved by the album cover. People who view both would feel rewarded by the extra understanding. This would give direct reference to our front cover, making it more rewarding for people who had seen the stickers. We could also place the unconventional sign used on our front cover on sign posts around London. This would be thought provoking and enigmatic. We had censorship in mind when making our video and there are no materials of an offensive nature. Audience research Indie industry ...read more.