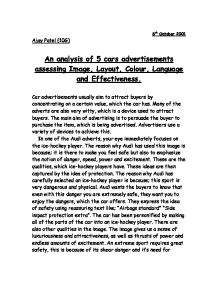 8th October 2001 Ajay Patel (10G) An analysis of 5 cars advertisements assessing Image, Layout, Colour, Language and Effectiveness. Car advertisements usually aim to attract buyers by concentrating on a certain value, which the car has. Many of the adverts are also very witty, which is a device used to attract buyers. The main aim of advertising is to persuade the buyer to purchase the item, which is being advertised. Advertisers use a variety of devices to achieve this. In one of the Audi adverts, your eye immediately focuses on the ice-hockey player. The reason why Audi has used this image is because; it is there to make you feel safe but also to emphasize the notion of danger, speed, power and excitement. These are the qualities, which ice-hockey players have. These ideas are then captured by the idea of protection. The reason why Audi has carefully selected an ice-hockey player is because; this sport is very dangerous and physical. Audi wants the buyers to know that even with this danger you are extremely safe, they want you to enjoy the dangers, which the car offers. They express the idea of safety using reassuring text like; "Airbags standard" "Side impact protection extra". The car has been personified by making all of the parts of the car into an ice-hockey player. There are also other qualities in the image. The image gives us a sense of luxuriousness and attractiveness, as well as thrusts of power and endless amounts of excitement. ...read more.

The reputation of Audi is outstanding, therefore little text is required in the adverts, and Audi are hopeful that their reputation will sell the car in the three advertisements. All three of the advertisements use high tech language and complex descriptions of the features, making the new car sounding very modern and advanced. Audi have also used personification in all of their advertisements. I think that the adverts are effective, but a little complicated for some people. I believe that by making this series of adverts Audi will attract many customers and, these customers will be persuaded into buying Audi products. In the first of the Vauxhall advertisement your attention is focused on the large bold text, which says, "Same heart, and different animal". This title is already suggesting two different points. Firstly it is personifying the car by making it into an animal and making the engine into a heart. This now gives the effect of animal magnetism. It is also making a so-called "boring" saloon into a desirable sports car. Because it has the same engine as the VX220 it is putting an element of fun and performance into the car. They still keep it a salon so that it can appeal to the younger generation and also to the families. The use of personification arouses the sense of curiosity, and the natural effect of this is to create animal magnetism. The text carefully describes the Vectra, "2.2 Litres engine and alloy wheels" all of this makes the car attractive and desirable, this is what may catch the younger generation to buy this car. ...read more.

In both of the Vauxhall advertisements there is an aim to capture the eye of the younger generation and also the older generation, with families. They are trying to do this so that they can sell more cars. They are achieving this by making advances in technology, which surrounds the interior of the car, and also by improving the performance of the cars. In all of the advertisements, which I have, reviewed personification and animal magnetism is used. I believe the reason why the advertisers want to use this is because, of the feeling, which we receive when, the buyers think of a car being an animal. To see an attractive car like a sweet animal. They hope that the "arhhh" feeling will be associated with the car, and will take over the mind of the buyer. I believe that the most effective advertisement was the series of the Audi ones. I think that the series was very effective, because each one was advertising a different concept of the Audi A4. They were all based around the same car. Audi have managed to make their advertisements very eye catching, and made the images a good eyesore. When the eyes hook on to the image they are stuck there. This is because there is a sense of curiosity in their mind. The most importance reason is because, they have showed all of the information they needed to, on a page, which has no movement, and is in still life. This is very hard to achieve, but Audi had conquered this very cleverly. ...read more.