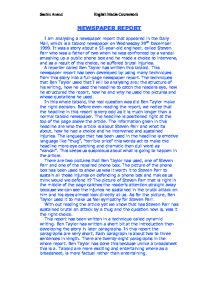 Analysing a newspaper report that appeared in the Daily Mail.

NEWSPAPER REPORT I am analysing a newspaper report that appeared in the Daily Mail, which is a tabloid newspaper on Wednesday 29th December 1999. It was a story about a 51-year-old engineer, called Steven Parr who was a father of two when he was confronted by a vandal smashing up a public phone box and he made a choice to intervene, and as a result of this choice, he suffered brutal injuries. A reporter called Ben Taylor has written this tabloid. This newspaper report has been developed by using many techniques from this story into a full-page newspaper report. The techniques that Ben Taylor used that I will be analysing are; the structure of his writing, how he used the headline to catch the readers eye, how he structured the report, how he and why he used the pictures and whose quotations he used. In this whole tabloid, the real question was did Ben Taylor make the right decision. Before even reading the report, we notice that the headline in this report is very odd as it is much longer than a normal tabloid newspaper. ...read more.

Tabloid are more exciting and entertaining where as a broadsheet, is more factual rather than entertaining. "he ended up in hospital needing emergency treatment for a broken jaw, detached retina and a fractured hand", these show that he was badly hurt by the thug who was about 6ft tall. The article also tells us that Steven Parr has added a lot of factual detail in his report to give it depth like "the father of two" it shows us he is a family man. Stroll with his Springer spaniel Bess" it also tells us he is a family man. "51 year old engineer" tells us what he does for a living. Also between paragraph one and two there is a change in atmosphere. In paragraph one he is walking his dog and then in paragraph two this atmosphere was changed to him fighting for his life. The word that synchronised the change in mood was the word "but". "The father of two was confronted by a vandal smashing up a phone box", this is where Steven Parr had a choice between shall he stop the vandalism done by the thug or walk away. ...read more.

His wife Jennifer who tells us her view on Parr recovering from his injuries and as she has been quoted it tells us Steven Parr is a family man with a wife. The police have described the attack as " vicious " and have said to Steven Parr he has done a honourable job to the town. The police has been quoted to tell us how he was "public spirited" and they have been quoted as it is now there case to find the attackers and bring them to justice. The last line of the article keeps on the spot because are we daring enough to put our life on the line to help someone or something but as well as helping them putting your life at risk. The conclusion is that Ben Taylor used the headline, picture, structure of the report, quotations and language to develop the story of Steven Parr getting attacked by vandals into a full-page report for the Daily Mail. This article is pro government meaning that against the government because they are really trying to say is that the police are not doing a good job and that the streets should be more protected. Sachin Anand English Media Coursework ...read more.