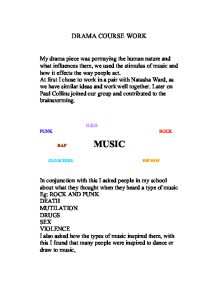 Analysis of My Dramatic Piece on Human Influences

DRAMA COURSE WORK My drama piece was portraying the human nature and what influences them, we used the stimulus of music and how it effects the way people act. At first I chose to work in a pair with Natasha Ward, as we have similar ideas and work well together. Later on Paul Collins joined our group and contributed to the brainstorming. R&B PUNK ROCK RAP MUSIC OLD SCHOOL HIP HOP In conjunction with this I asked people in my school about what they thought when they heard a type of music Eg: ROCK AND PUNK DEATH MUTILATION DRUGS s*x VIOLENCE I also asked how the types of music inspired them, with this I ...read more.

When we start the play she is having problems at home and is failing her other subjects, English and Geography. As she has a major art project on the go, THE WALL. The wall is her dream this is what will make her happy and in to university. Unfortunately her friend is unsupportive of this and believes she is wasting her time. The friend played by Natasha comes from a totally different background and has no idea what Kayleigh (my character) feels Natasha believes that Kayleigh should be concentrate on her studies in the subjects she is failing. ...read more.

Kayleigh and Paul finally turn to witchcraft (which we were able to research through the net and friends so as not to harm anyone when we did the spell) to seek revenge on the person who destroyed Kayleigh's feeling unknown consciously to Kayleigh she is harming her own friend. The performance of our play went very well the scenes flowed and no one forgot their lines as in previous rehearsals. I was very nervous as had not been done before and I hoped that it would go down well with my classmates. The only problem we had was the lighting in one scene as it was turned on during and scene change. All the props and the wall was designed by myself . BY KAYLEIGH WAREHAM ...read more.