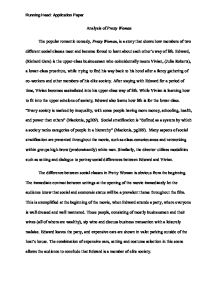 Analysis of Pretty Woman. The popular romantic comedy, Pretty Woman, is a story that shows how members of two different social classes meet and become forced to learn about each others way of life.

Analysis of Pretty Woman The popular romantic comedy, Pretty Woman, is a story that shows how members of two different social classes meet and become forced to learn about each other's way of life. Edward, (Richard Gere) is the upper-class businessman who coincidentally meets Vivian, (Julia Roberts), a lower-class prostitute, while trying to find his way back to his hotel after a fancy gathering of co-workers and other members of his elite society. After staying with Edward for a period of time, Vivian becomes assimilated into his upper-class way of life. While Vivian is learning how to fit into the upper echelons of society, Edward also learns how life is for the lower class. "Every society is marked by inequality, with some people having more money, schooling, health, and power than others" (Macionis, pg209). Social stratification is "defined as a system by which a society ranks categories of people in a hierarchy" (Macionis, pg209). Many aspects of social stratification are presented throughout the movie, such as class-consciousness and networking within groups high-brow (predominantly) white men. Similarly, the director utilizes modalities such as setting and dialogue to portray social differences between Edward and Vivian. ...read more.

In this scene, the dialogue plays an important role in portraying society's view of Vivian, as she is a prostitute. Through her dialogue, " I don't think we have anything your size," the saleswoman makes it clear that Vivian is not welcome in the store due to her social status. When both she and Edward go shopping the next day to a different store, and Edward shares with the store manager his wealth, Vivian is shown everything that she could possibly want. The salespeople even order her a pizza to "kiss up" to Edward in hopes that he will spend more money. Because of his class-consciousness, Edward knows that with enough money, he can get anything that he wants. Vivian on the other hand, cannot because she is seen throughout society as a lower/lesser person. Another aspect of social stratification that is seen in the movie Pretty Woman, is male supremacy. Male supremacy, is the "ideology that men are superior to women and should have power and control over women". Male supremacy is seen in the relationship between Vivian and Edward's lawyer, Phil Stuckey. ...read more.

Vivian became assimilated into Edward's culture, learning how to dress properly, how to eat properly and how to behave properly. Had it been the other way around, where Edward was brought into Vivian's lifestyle, it would have been a completely different experience. Male supremacy, class-consciousness and networking are all seen throughout different levels of society. The movie Pretty Woman briefly showed what life living in the lower class was like, but concentrated mostly on the upper class lifestyle. Throughout the movie, Pretty Woman, references are made concerning the different social classes. Most of the film concentrates on the lifestyle of Edward and the upper class. It gives the impression of upper class superiority, and the need to "save" members of the lower class. This is shown by Edward's need to save and care for Vivian. The film Pretty Woman remains a popular movie still today for many reasons, among which is the prevalent belief that the upper classes need to "save" and/or "care for" the lower classes. Either, both or a combination of these two beliefs, and the different opinions surrounding them are the root of many political debates and economic agendas today. Similarly, they have shaped the development of American culture and society. ...read more.