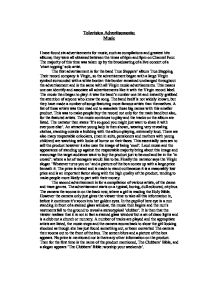 Television Advertisements: Music I have found six advertisements for music, such as compilations and greatest hits albums; they were all obtained between the times of 6pm and 8pm on Channel Four. The majority of this time was taken up by the broadcasting of a live concert of a 'chart topping' solo artist. The first advertisement is for the band True Steppers' album True Stepping. Their record company is Virgin, so the advertisement began with a large Virgin symbol surrounded with a white border: this border remained unchanged throughout the advertisement and is the same with all Virgin music advertisements. This means one can identify and associate all advertisements like it with the Virgin record label. The music then began to play: it was the band's number one hit and instantly grabbed the attention of anyone who knew the song. The band itself is not widely known, but they have made a number of songs featuring more famous artists than themselves. A list of these artists was then read out to associate these big names with this smaller product. This was to make people buy the record not only for the main band but also, for the featured artists. ...read more.

A number of tracks are played and the appropriate artists are listed, the music stops and the camera zooms back to show the girl looking shocked as though she has just found something out, or been converted The camera then zooms out to the front of the bus. The screen blurs and a picture of the box appears. No price is mentioned nor is there any other information on the product. Then for the first time is the name of the product mentioned, The Clubbers' Bible, and a slogan appears 'The Clubbers' Bible: worship your weekends'. The advertisement starts off dull so that the contrast between the bright club and the grey bus is as large as possible. The bus is meant to show how boring your life is and how colourful your life could be if you brought this product: it is appealing to our aspirational desires. The girl is reading the Bible for the simple reason of the products name. The nun in front of the stained glass window draws the viewer further into the religious implications the product makes but then it is all change to the music side of the product. ...read more.

in order to catch their target audience, whom I believe to be mainly teenagers, because they have the largest effect on record sales. If they are not buying the record themselves then they are having it bought for them as a gift. It is my belief that teenagers are the target audience because the majority of the crowd at the concert were teenagers: therefore I come to the conclusion that this percentage will also be the equivalent for home viewers, the majority would be in their teens. Here are the reasons that I believe that the adverts are aimed at people in their teens: firstly all of the people featured in the above advertisement, who were not artists, appear to be in their early twenties or teens, so teenagers can imagine themselves in the place of those in the advertisement. Secondly, a lot of bright and appealing colours are used throughout, which I find attractive, and I therefore conclude that other teenagers would like this and it would help the adverts to lodge themselves in the mind of the viewer. Finally, s*x appeal is used in two of the above advertisements, but only very mildly, and as a teenager one becomes aware, for the first time, of the use of s*x in advertising in the real world.? ? Tim Godfrey 10C (1,268 words) ?? ?? ?? ?? ...read more.