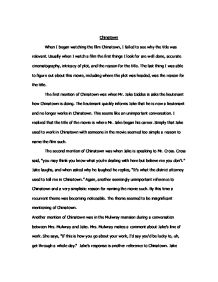 Chinatown When I began watching the film Chinatown, I failed to see why the title was relevant. Usually when I watch a film the first things I look for are well done, accurate cinematography, intricacy of plot, and the reason for the title. The last thing I was able to figure out about this movie, including where the plot was headed, was the reason for the title. The first mention of Chinatown was when Mr. Jake Giddes is asks the lieutenant how Chinatown is doing. The lieutenant quickly informs Jake that he is now a lieutenant and no longer works in Chinatown. This seems like an unimportant conversation. I realized that the title of the movie is where Mr. Jake began his career. ...read more.

Again, another seemingly unimportant reference to Chinatown and a very simplistic reason for naming the movie such. By this time a recurrent theme was becoming noticeable. The theme seemed to be insignificant mentioning of Chinatown. Another mention of Chinatown was in the Mulwray mansion during a conversation between Mrs. Mulwray and Jake. Mrs. Mulwray makes a comment about Jake's line of work. She says, "If this is how you go about your work, I'd say you'd be lucky to, uh, get through a whole day." Jake's response is another reference to Chinatown. Jake mentions his past, dangerous police work for the district attorney Chinatown when he did "as little as possible" - that was the last time he had experienced similar dangers. ...read more.