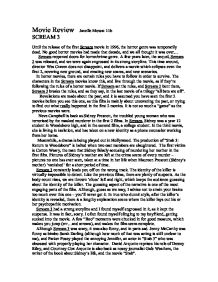 Movie Review Janelle Mowat 11b SCREAM 3 Until the release of the first Scream movie in 1996, the horror genre was temporarily dead. No good horror movies had made that decade, and we all thought it was over... Scream reopened doors for horror/crime genre. A few years later, the sequel, Scream 2 was released, and we were again engrossed in its strong storyline. This time around, director Wes Craven does not disappoint, and delivers a movie which eclipses even the first 2, covering new ground, and creating new scares, and new scenarios. In horror movies, there are certain rules you have to follow in order to survive. The characters in the Scream movies know this, and live through the movie, as if they're following the rules of a horror movie. If Scream set the rules, and Scream 2 bent them, Scream 3 breaks the rules, and as they say, in the last movie of a trilogy "all bets are off". ...read more.

'vanished' for a short period of time. Scream 3 constantly leads you off on the wrong track. The identity of the killer is virtually impossible to detect. Like the previous films, there are plenty of suspects. As the body count rises, we are thrown 'clues' left and right, which keeps the audience guessing about the identity of the killer. The guessing aspect of the narrative is one of the most engaging parts of the film. Although, guess as we may, I advise not to strain your brains too much over this one - you'll never get it. In true who-dunnit style, after the killer's identity is revealed, there is a lengthy explanation scene where the killer lays out his or her psychopathic motivation. Scream 3 had a strong storyline and I found myself engrossed in it, as it kept the suspense. It was in fact, scary. I often found myself clinging to my boyfriend, getting sucked into the movie. ...read more.

This was somewhat annoying, as when you see a film, you usually want to know at least a little bit about the semi-main characters before they are killed off. This factor did not spoil the film for me though. The whispering in the film was done with some sort of special effect, and it made it feel like the one doing the whispering was in the theatre with me, sitting not too far away. Of course, this was not the case, but it made certain moments seem scarier than they really were. The death scenes were convincing, and very realistic. Surprisingly enough, Scream 3 was underhyped once released. The reviews I read were so shockingly negative that I was reluctant to see the movie, But again, Wes Craven has pulled through and has come up with just the right ingredients for a great horror film. I give Scream 3 four stars out of 5. It was a strong film, but the underdevelopment of 1 or 2 of the characters let it down a tad. Nonetheless, it's a great movie, definitely one to put on your must see list. ...read more.