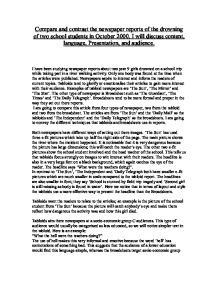 Compare and contrast the newspaper reports of the drowning of two school students in October 2000. I will discuss content, language, Presentation, and audience. I have been studying newspaper reports about two year 9 girls drowned on a school trip while taking part in a river walking activity. Only one body was found at the time when the articles were published. Newspapers aspire to interest and inform the readers of current topics. Tabloids tend to glorify or emotionalise their articles to gain more interest with their audience. Examples of tabloid newspapers are 'The Sun', 'The Mirror' and 'The Star'. The other type of newspaper is Broadsheet such as 'The Guardian', 'The Times' and 'The Daily Telegraph'. Broadsheets tend to be more formal and proper in the way they set out there reports. I am going to compare this article from four types of newspaper, two from the tabloid and two from the broadsheet. The articles are from 'The Sun' and the 'Daily Mail' as the tabloids and 'The Independent' and the 'Daily Telegraph' as the broadsheets. ...read more.

This suggests that the audience of a lower education would find this language simple, whereas the broadsheets target socio economic group C+. The target audience of a broadsheet is around 30 upwards. Broadsheets commonly report on political, economic and worldwide subjects, therefore content will be understood by a more competent and sophisticated audience. Here is an example from 'The Independent': "Police are investigating the circumstances surrounding the death of a teenage girl who was swept away while walking in a swollen river on a school residential trip." The wording is more formal with the use of words such as 'investigating' and 'circumstances', so the articles from the broadsheet are focused more at an audience which is capable, than the less capable tabloids audience. The language in a tabloid is intended to make the article more effective. The first sentence of 'The Sun' shows the simple language used: "David Bewley and other parents blasted there decision to allow the youngsters to wade through the fast flowing water." The use of the word 'blasted' is colloquial meaning it is simple. ...read more.

The article from 'The Sun' uses a sad and angry tone by using emotive language and opinions. However the articles from 'The independent' and 'The Daily Telegraph' have a more informative tone because they tell the article by facts: "The body of a 14-year old Rochelle Cauvet was seen from a police helicopter at 9.30pm." This sentence gives the reader facts that can be proved: so the reader is given proper detail of the incident. The usage of data also makes this sentence factual. From analysing the article from the broadsheet and tabloid newspapers. I can conclude that the articles are very different whether it is style, audience, language, and presentation. This is because both newspapers have different types of audiences. Tabloids use more emotional language to interest there readers, and broadsheets concentrate on informing the reader with facts. Tabloids having audiences which are less educated means they need stories they can relate to in some form. Broadsheets' having a higher educated audience means they need stories that inform them in a proper way. Both newspapers still use images, but broadsheets have more dialogue and avoid using large images in their articles. From this article I can say that both newspapers have hit their desired audience. ?? ?? ?? ?? ...read more.