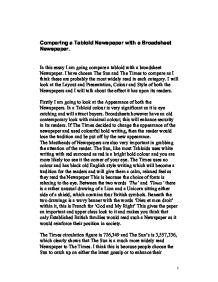 Comparing a Tabloid Newspaper with a Broadsheet Newspaper.

Comparing a Tabloid Newspaper with a Broadsheet Newspaper. In this essay I am going compare a tabloid with a broadsheet Newspaper. I have chosen The Sun and The Times to compare as I think these are probably the most widely read in each category. I will look at the Layout and Presentation, Colour and Style of both the Newspapers and I will talk about the effect it has upon its readers. Firstly I am going to look at the Appearance of both the Newspapers. In a Tabloid colour is very significant as it is eye catching and will attract buyers. Broadsheets however have an old contemporary look with minimal colour; this will enhance security in its readers. If The Times decided to change the appearance of the newspaper and used colourful bold writing, then the reader would lose the tradition and be put off by the new appearance. The Mastheads of Newspapers are also very important in grabbing the attention of the reader. The Sun, like most Tabloids uses white writing with red surround as red is a bright bold colour and you are more likely too see it the corner of your eye. ...read more.

I am now going to study the headlines and stories of each of the Newspapers. I feel that The Sun deals with more minor stories and like most tabloids exaggerate them to ensure readers. Tabloids always look for News-values, stories for which there is a public demand. The Times deals only with stories, which are known to be true, and if the story is a rumour it will clearly state that in the article. The same article which The Sun might have as a Headline, in The Times might only be a small piece of text in the inside pages or sometimes they might not even cover the story at all. The Sun is a much smaller paper than the Times and the Headlines takes up the majority of the front page, whereas The Times Headline takes either only a small part at the top of the Newspaper or a quarter of the left hand side of the Newspaper. Like the Masthead The Times uses a Times New Roman font, which is another feature that ensures the readers security. The Sun also like 'its' Masthead uses very large, colourful and bold fonts, this design is typical in most Tabloid Newspapers as it grasps the attention of its readers. ...read more.

Underneath the masthead is the date and price of the newspaper. A large colour photograph is found beneath the plugs, it has the strap line directly below it. The main headline is beneath the strap-line. Another, smaller photograph is situated just under the main headline. On the left of the photograph is a small headline with its text. On the right of that is the text for the main headline. Both of the Newspapers will most probably cover News, Sports news, the weekly weather and the Times only, prints death announcements. To promote the Newspaper, The Times uses the occasional television advert and boasts its award for the 'newspaper of the year, at the top of ever issue. The Sun Promotes its paper by frequent advertising on the television and often uses n**e models on page three to help. This concludes my essay. I have looked many aspects of a Tabloid and of a Broadsheet. I have looked at the appearance, the mastheads, circulation figures, readers and there age, population categories, headlines and stories, the language used, the layout, and the promotion of both the Newspapers I my opinion I would read The Times as it is a secure, relaxed paper and I would feel ensured that the news I am reading is genuine. 1 ...read more.