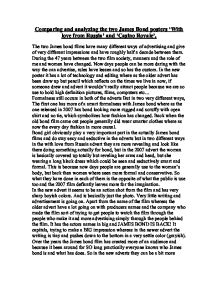 Comparing and analyzing the two James Bond posters 'With love from Russia' and 'Casino Royale'. The two James bond films have many different ways of advertising and give of very different impressions and have roughly half a decade between them. During the 47 years between the two film society, manners and the role of me and women have changed. Now days people can be more daring with the way the can advertise, rules have lessen and so has the custom. In the new poster it has a lot of technology and editing where as the older advert has been draw up but pencil which reflects on the times we live in now, if someone drew and advert it wouldn't really attract people because we are so use to bold high definition pictures, films, computers etc... Formalness still occurs in both of the adverts But in two very different ways, The first one has more of a smart formalness with James bond where as the one released in 2007 has bond looking more rugged and scruffy with open shirt and no tie, which symbolizes how fashion has changed. ...read more.

In the new advert it seems to be an action shot from the film and has very sharp boyish colors. And is basically just the photo. Very little writing and advertisement is going on. Apart from the name of the film whereas the older advert have a lot going on with producers names and the company who made the film sort of trying to get people to watch the film through the people who make it and more advertising simply through the people behind the film. It has the actors names in big and JAMES BOND IS BACK! It capitals, trying to make a BIG impression whereas in the newer advert the writing is tiny and pushes down to the bottom in a very settle color (grayish). Over the years the James bond film has created more of an audience and because it been around for SO long practically everyone knows who James bond is and what has does. ...read more.

The facial expressions are very suggestive in both adverts they both symbolize a lot about the films, James Bonds face in the 'with love from Russia film' is very seductive and mischievous but has shade on side meaning in a way that the lighter side is for the goodness and the loves of his life, but the dark side means the evil and dangerous side. In conclusion the two films are so different in so many ways, but at the end of the day James bond will always be James bond including its icon logo 007, new bond girls, promising violence and a lot of passion. And that why I think James bond is so popular because it comes under many genres. The audience can pretty much be anyone with apart from the under 15's men, women and teenagers. And personally think James bond will go on until people keep watching it. It's been going on a good 50 years and has been getting increasingly popular with more actors playing James bond and it is simply the best of Britain. Alison Mullin-Williams 12RE ...read more.