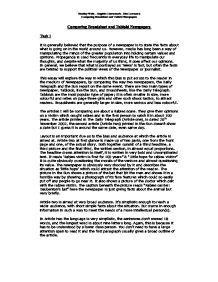 Comparing Broadsheet and Tabloid Newspapers Task 1 It is generally believed that the purpose of a newspaper is to state the facts about what is going on in the world around us. However, media has long been a way of manipulating the minds of the greater population into holding certain values and opinions. Propaganda is used frequently in everyday life to manipulate our thoughts, and despite what the majority of us think, it does affect our opinions. In general, we believe that what is portrayed as 'News' is fact, but often the facts are twisted to support the political views of the Newspaper or journalist. This essay will explore the way in which this bias is put across to the reader in the medium of Newspapers, by comparing the way two newspapers, the Daily Telegraph and the Sun report on the same event. There are two main types of newspaper, Tabloids, like the Sun, and Broadsheets, like the Daily Telegraph. Tabloids are the most popular type of paper; it is often smaller in size, more colourful and relies on page three girls and other such shock tactics, to attract readers. ...read more.

It's simplistic enough to reach a wider audience, with short simple facts about the situation. But crams in enough information in such a way to meet the needs of a more intellectual person(s). In Article two the language is very simplistic, the sentences don't exceed 18 words, and the longest word is about nine letters long. Again, this is because it has to be understood by a lower class person. You don't need to have a large attention span to read it and the first paragraph usually gives a broad outline of the article. The tone of the advert makes the whole content of the article sound like a shock. For example, "Health officials were anxious last night to allay public concern". Maybe implying that the public are very concerned by the man's condition and want to know what is being done about this shock accident. Also it could mean the public want to know how this could have happened to someone who works regularly with wildlife animals. I believe that article two is not biased but are on the public's side and present it in a way in which someone is to blame for this accident and not the man himself. ...read more.

E.g. "He presented with vomiting, numbness and pins and needles in his left hand..." Which brings the article to another level of seriousness, because the question crosses your mind that. Why aren't the doctors preventing this from happening as the man must be in much discomfort. This article does not seem to be biased at all. It gives both sides of the argument a fare trial and leaves the article open-ended so you can make your own decision. This article interviews a few people from doctors to professor's, of which they get a mixed response. The doctors mainly stated how the man was coping with the disease and described the facts of it, where as the professor explains the concerns of the public and why they are concerned. In this particular article there is no definite message. As I stated earlier it is left remarkably wide open for your own judgement. In my opinion I prefer the Daily Telegraph to the Sun because it's more to the point. It doesn't mess around with puns or large flashy pictures; it gets to the point in great detail. It also gives lots of opinions from lots of angles. Bradley Wells - English Coursework - Mrs Lawrence Comparing Broadsheet and Tabloid Newspapers ...read more.