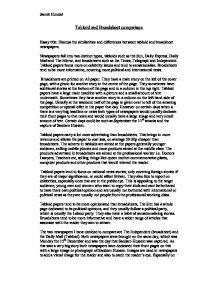 Tabloid and Broadsheet comparison Essay title: Discuss the similarities and differences between tabloid and broadsheet newspapers. Newspapers fall into two distinct types, tabloids such as the Sun, Daily Express, Daily Mail and The Mirror, and broadsheets such as the Times, Telegraph and Independent. Tabloid papers focus more on celebrity issues and tend to sensationalise. Broadsheets tend to be more informative, covering more political and international news. Broadsheets are printed on A2 paper. They have a main story on the left of the cover page, with a photo for another story in the centre of the page. They sometimes have additional stories at the bottom of the page and in a column in the top right. Tabloid papers have a large main headline with a picture and a small amount of text underneath. Sometimes they have another story in a column on the left-hand side of the page. Usually at the weekend half of the page is given over to tell of the amazing competition or special offer in the paper that day. However on certain days when a there is a very big headline or news both types of newspapers would usually dedicate their front pages to that news and would usually have a large image and very small amount of text. ...read more.

This image is quite a powerful one as it is visual proof of Saddam Hussein's capture. The headline justifies this by reading, "Saddam, mighty dictator caught like a rat in a hole". This is all in bold and underlined. They use a metaphor,"Like a rat in a hole", to make the title more catching. This whole area is outlined in red to give it a clear outline and to attract attention. Even though it is a very important heading and have used nearly their entire page to it, they still have dedicated the top part of the paper to promote the newspaper by offering a special offer when brought. This is another way to dispatch this newspaper from the others so the reader would buy it. Beneath the large bold, underlined headline, the Daily Mail has given a short article on the main headline, which is in much smaller font as the headline. In this paragraph they have used many techniques to grab the readers attention. Such methods as statistics, "Yet when 600 American troops converged on his hideaway". The daily mail has tried and probably did succeed to catch the reader's attention by its front page and also was probably able to persuade the reader to buy it. ...read more.

Also the broadsheets front page still is able to give its general items as it does on regular days. Also it is able to provide information that tabloids do not such as weather, stock exchange and a few other summarised or links to articles within the page for readers who may not be interested in the main news report. The use of colour adverts on both of the newspapers is also able to promote the newspapers quite well as it can appeal to certain target audiences and also is able to attract the readers to certain special offers. The only big difference would be that the Independent is able to provide more information on its front page compared to the Daily Mail being a broadsheet. On the whole I think the layout of The Independent and the techniques used to catch the readers are much better than the Daily Mail as the colours used for the background and the text catch the readers eye. However the photograph in broadsheet does lack in realism compared to the tabloid. But at the end of the day both newspapers are able to attract the reader in their own way and its own target audience, but broadsheets being more informative compared to tabloids will always have my attention as they are able to provide a wide range of articles because of the large format of the paper. Jasmit Hundal ...read more.