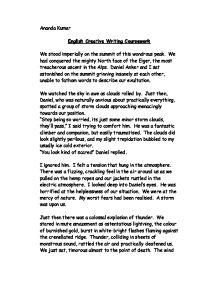 Creative Writing - We stood imperially on the summit of this wondrous peak.

Ananda Kumar English Creative Writing Coursework We stood imperially on the summit of this wondrous peak. We had conquered the mighty North face of the Eiger, the most treacherous ascent in the Alps. Daniel Anker and I sat astonished on the summit grinning insanely at each other, unable to fathom words to describe our exultation. We watched the sky in awe as clouds rolled by. Just then, Daniel, who was naturally anxious about practically everything, spotted a group of storm clouds approaching menacingly towards our position. "Stop being so worried, its just some minor storm clouds, they'll pass," I said trying to comfort him. He was a fantastic climber and companion, but easily traumatised. The clouds did look slightly perilous, and my slight trepidation bubbled to my usually ice cold exterior. "You look kind of scared" Daniel replied. I ignored him. I felt a tension that hung in the atmosphere. There was a fizzing, crackling feel in the air around us as we pulled on the hemp ropes and our jackets rustled in the electric atmosphere. I looked deep into Daniel's eyes. He was horrified at the helplessness of our situation. We were at the mercy of nature. My worst fears had been realised. A storm was upon us. ...read more.

The old ropes were absolutely safe but as usual Daniel would find something to be anxious about. I started to traverse the thin ice and crumbly limestone, always looking down to see how Daniel was doing. He was a magnificent climber but when told this he thought people were making fun of him. I smiled to myself as he ascended with striking ease up towards me. He noticed my smugness and gave me a funny look. We carried on upwards for a while when with a snapping sound one of my ice screws became dislodged from the rock. I slipped down a few feet but managed to catch my footing on a jut of limestone rock. Small chunks of rock rained upon us which Daniel and I dodged routinely. "You okay" Daniel stammered, clearly shaken by what had happened. "I'm fine. The ice up here is rubbish though. It can scarcely hold an ice screw" I responded. We carried on, albeit with much more concern in our actions. I kept looking downwards to check on Daniel, who navigated the ice and rock wall with masterful skill. It seemed he was born to climb. When we reached the second ice field, about 2,500m up, we knew this was where the mountain would sort the unworthy from the worthy. ...read more.

"Its okay" he said cheerfully. "Don't worry I'm fine. Just look around, look what we have done" I smiled at him. It seemed we had traded roles for a minute. I had become the hushed, nervous one, and Daniel had become the cheerful, strong character. Anyway, we both sat silently on the summit like Kings on a throne, excitement flowing from us like a river. I slipped out of my delusion, and my senses gradually returned to the malicious storm. Hail washed over us in waves of stinging needles. Ice formed on the narrow rocky shelf we were perched on, crunching under our feet as we winced and slipped on the sliver-thin shards of raw glass. Boulders blasted skywards by bolts of flame tumbled against the searing light. The crashing roar of thunder, pounded relentlessly against our ear drums and the smell of scorched rock flooded our noses. It seemed the tempest would never end and we sat huddled for almost an age. Suddenly, everything went dead. The storm passes into the horizon bickering and snapping angrily. It seemed the storm was livid at not defeating us. A tranquil rain fell about us. The storm was over. The setting sun painted the emptied clouds with glowing pastels. The beauty of this site enthralled us. Against all the odds, we had conquered this amazing piece of nature's handiwork. Daniel and I had broken all our physical and mental barriers, and beaten the Eiger. ...read more.