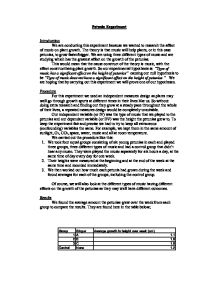 Petunia Experiment - We are conducting this experiment because we wanted to research the affect of music on plant growth.

Petunia Experiment Introduction We are conducting this experiment because we wanted to research the affect of music on plant growth. The theory is that music will help plants, or in this case petunias, to grow faster/bigger. We are using three different types of music and are studying which has the greatest affect on the growth of the petunias. This would mean that the cause construct of the theory is music, with the effect construct being plant growth. So our experimental hypothesis is: "Type of music has a significant effect on the height of petunias" causing our null hypothesis to be "Type of music does not have a significant effect on the height of petunias." We are hoping that by carrying out this experiment we will prove one of our hypotheses. Procedure For this experiment we used an independent measures design as plants may well go through growth spurts at different times in their lives like us. ...read more.

3. We then worked out how much each petunia had grown during the week and found averages for each of the groups, including the control group. Of course, we will also look at the different types of music having different effects on the growth of the petunias as they may well have different outcomes. Results We found the average amount the petunias grew over the week from each group to compare the results. They are found here in the table below; As it is not very easy to compare results in the table I will also convert these results into a graph. As you can see, groups B and C grew considerably more than groups A and D. Group D was the control group and so heard no music during the week. So out of the three groups that had music played to them, two grew a lot more than the group that did not hear music. ...read more.

We could have also carried it out at different times of year as that could explain different growing patterns. Another improvement could have been carrying it out for longer. We should have had a much larger range of music types to thoroughly investigate the effects of different types of music on their growth and used more control groups or investigate beforehand to find the normal average growth over a week to be able to really compare. If we wanted to carry out further investigation then we could slightly alter the experiment in these ways: * Try out different sorts of plants * Research the effects of the volume of music being listened to * Investigate if similar effects occur in humans e.g. music helping us to learn new skills or understand things better * We could even investigate whether having the music live or not has an effect! There are, of course, lots of other ways as well. We could continue this research in these ways to try and deepen our understanding of the subject and find out more about it. ...read more.