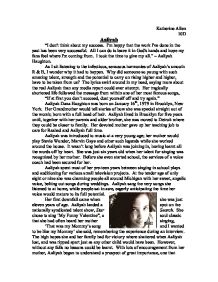 Aaliyah - original writing on the life of the singer.

Katherine Allen 10D Aaliyah "I don't think about my success. I'm happy that the work I've done in the past has been very successful. All I can do is leave it in God's hands and hope my fans feel where I'm coming from. I took the time to give my all." - Aaliyah Haughton. As I sit listening to the infectious, sensuous harmonies of Aaliyah's smooth R & B, I wonder why it had to happen. Why did someone so young with such amazing talent, strength and the potential to carry on rising higher and higher, have to be taken from us? The lyrics swirl around in my head, saying more about the real Aaliyah than any media report could ever attempt. Her tragically shortened life followed the message from within one of her most famous songs, "If at first you don't succeed, dust yourself off and try again." Aaliyah Dana Haughton was born on January 16th, 1979 in Brooklyn, New York. Her Grandmother would tell stories of how she was special straight out of the womb; born with a full head of hair. Aaliyah lived in Brooklyn for five years until, together with her parents and older brother, she was moved to Detroit where they could be closer to family. ...read more.

Kelly. Tales of marriage and even pregnancy were spread. All were denied. The storm settled and three years passed, leaving many wondering what Aaliyah's next project would be. She teased fans with numerous guest appearances, singing songs from soundtracks and building them up for the time she would truly return, stronger then ever. Aaliyah left R. Kelly behind to prove, more to herself than to anyone else, that she had grown as an artist and could make it without him. Perhaps the rumors that had at one point looked like they could destroy her had in fact been a Godsend. Would Aaliyah have made this choice if tales of something more than a good friendship and working partnership between the two hadn't sprung up? Whatever her reasons, the change was for the best. She teamed up with the then unknown Missy Elliot and Timbaland and, between the three, a new sound was created, once again irresistible to fans. They blended rough Hip-Hop beats with Aaliyah's silky, laid-back vocals, the voice of an angel. The result was a sassy, sexy, sophomore album, One In A Million. The album went double platinum, putting her among the superstars of the music industry and silencing critics in their questions as to whether or not she had been just a 'one hit wonder.' ...read more.

Disbelief, anger and, most of all, a great sense of sorrow and grief spread with the news. She had lived her life like an angel, fallen from the heavens. Through her life she rose and fell and now she had risen for the final time. We can only hope that, when the time came, she knew how much she was loved. Aaliyah will never be forgotten. Through her music and her memory, she will live on. The album in the CD player draws to a close. It is an album that she never saw released, an album that wouldn't even have been put together if she was still with us; a tribute to Aaliyah, I Care For You. Visions of her float by with the music and songs take on a whole new meaning now she's gone. When Miss You is played, instead of thinking of the singer's lost love, we think of ours, Aaliyah. Every note she sang was a part of her and with every song we understand more about her. She was a star in every sense of the word and I believe she continues to be so even now; still a star, shining brightly down on us. There is no doubt in my mind that this angel lived up to the true meaning of her name, 'The highest, most exalted one.' The best. Aaliyah. ...read more.