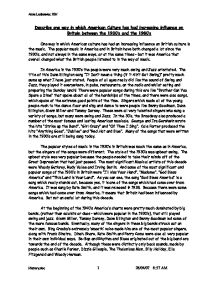 Describe one way in which American Culture has had increasing influence on Britain between the 1930's and the 1980's One way in which American culture has had an increasing influence on British culture is the music. The popular music in America and in Britain have both changed a lot since the 1930's, and not always in the same ways, or at the same times - but it was America that overall changed what the British people listened to in the way of music. In America in the 1930's the people were very much swing and Jazz orientated. The title of this Duke Ellington song "It Don't mean a thing (if it Ain't Got Swing)" pretty much sums up what I have just stated. People of all ages really did like the sound of Swing and Jazz, they played it everywhere, in pubs, restaurants, on the radio and whilst eating and preparing the Sunday lunch! There were popular songs during this era like "Brother Can You Spare a Dime" that spoke about all of the hardships of the times, and there were also songs, which spoke of the extreme good points of the time. ...read more.

This type of music was mainly popular with teenagers who were trying to break out of the mainstream American middle class mould. Rock 'n' roll was mainly popular with the rebellious young people in society. Popular artists were Bill Haley, Elvis Presley and Jerry Lee Lewis. The influence of these early rockers had been felt in popular music world wide (including Britain). Rock 'n' roll was one of the best-known styles of the 50's in Britain. It was defined as popular music that was usually played on electronically amplified instruments and it was characterised by a persistent, heavily accented beat. There was much repetition of simple phrases and there were often elements of country, folk and blues. Bubblegum was also very popular in Britain, it was rock music that was characterised by simple repetitive phrasing and was intended especially for young teenagers. R&B (Rhythm and Blues) was very popular music with elements of blues and n***o folk music. Some of the most famous artists in Britain were Elvis Presley - he was an American artist and was famous for swinging his hips and strumming a guitar at his concerts! ...read more.

It had started in prison 20 years earlier by jailed black inmates who, in the absence of instruments, turned poems into musical rhythms. The styles of music in Britain in the 1980's were extremely similar to the styles in America. But, as well as all of the American singers, there were also many British singers which got to the top of the charts. Some of the most famous groups in Britain in the 80's were Van Halen, Queen, Beachboys, Blondie, Boston, B52's, Dire Striaits and the Village People. As we can see from the amazing similarity in the styles of music that were being listened to in Britain and America in the 1980's, America was still having an awful lot of influence on the songs listened to by the British. Overall, as a final response to the question in the title, one of the things that America had an increasing influence on in Britain was the music that people listened to. We can tell this because slowly but surely the music that people listened to in Britain became more and more like that which was listened to by the American citizens. And also, more and more bands spread their music over from America and became very popular in Britain too. Amie Lenkowiec 10H History.doc 1 28/04/07 8:57 AM ...read more.