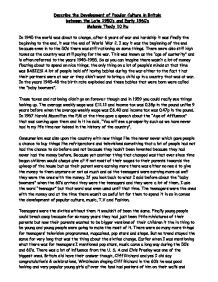 Describe the Development of Popular Culture in Britain between the Late 1950's and Early 1960's.

Describe the Development of Popular Culture in Britain between the Late 1950's and Early 1960's Melanie Thody 10 Ru In 1945 the world was about to change, after 6 years of war and hardship it was finally the beginning to the end, it was the end of World War 2. I say it was the beginning of the end because even in to the 50's there was still rationing on some things. There were also still high taxes as the country was still paying for the war. This was known as the "age of austerity" and is often referred to the years 1945-1955. So as you can imagine there wasn't a lot of money floating about to spend on nice things, the only thing on a lot of people's minds at that time was BABIES! A lot of people held off having babies during the war either to the fact that their partners were at war or they didn't want to bring a child up in a country that was at war. In the years 1945-48 the birth rate exploded and these babies that were born were called the "baby boomers". These taxes and rationing didn't go on forever though and in 1959 you could really see things looking up. ...read more.

There were so many more things for teenagers' television programmes, magazines, pop stars and shops. But no trend stayed the same for very long that was the thing about the sixties change. Earlier when I was mentioning what there was for teenagers I mentioned pop stars, music came a long way during the 50's and 60's. There was a lot of influence from the U. S. A and Elvis Presley was one of the biggest ones. Britain did have their answer though, Cliff Richard and yes I did say congratulation's & celebrations, Wimbledon singing Cliff Richard in the 60's he was good looking and very popular young girls all over the land had posters of him on their walls and posters were a new thing as well. Another thing that changed was that for the first time bands and artists were writing their own lyrics, in the early sixties they were generally boy meets girl scenario lyric which parents were fine with but as time went on the lyrics did get much more explicit. A band known for this was the Beatles they were young, new, wrote their own lyrics and had liverpudlian accents. Before the sixties anyone in the limelight spoke the queens English all very how now brown cow but they were different a change to the norm, which I can't, stress enough that change was the sixties. ...read more.

The Mini-Skirt was seen as an attack on the establishment and in the sixties there was a total lack of respect for traditional idea's and values such as the church, politics and the monarchy they all became targets for comedy and satire. One of the first attacks of satire was in 1961 and was "Beyond the Fringe" Peter Cook, Dudley Moore, Jonathan Miller and Alan Bennett were the people behind it and they made fun of Harold Macmillan, the church and the royal family. Private Eye was first Published in the same year and made fun of politicians. In 1962 television got its chance of satire as well with tw3, which stood for 'That was the week that was' It was shown on a Saturday night and got ratings of 12,000,000 people It made fun of news items. The sixties was a period of change, nothing stayed the same for very long and for the first time people were free with their feelings either if it was what they wanted to say about politics or what clothes they wanted to wear or music they wanted to listen to. Popular culture was about young people and for young people it was the best time of their lives Joanna Lumley once said that "It was very heaven to be alive" which many people thought about the sixties because at last Britain had done away with pompous attitude towards life. ...read more.