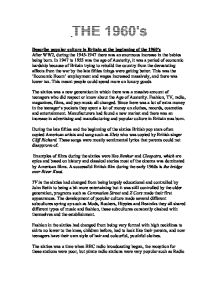 Describe popular culture in Britain at the beginning of the 1960's

Describe popular culture in Britain at the beginning of the 1960's After WW2, during the 1945-1947 there was an enormous increase in the babies being born. In 1947 to 1955 was the age of Austerity, it was a period of economic hardship because of Britain trying to rebuild the country from the devastating affects from the war by the late fifties things were getting better. This was the 'Economic Boom' employment and wages increased massively, and there was lower tax. This meant people could spend more on luxury goods The sixties was a new generation in which there was a massive amount of teenagers who did respect or know about the Age of Austerity. Fashion, TV, radio, magazines, films, and pop music all changed. Since there was a lot of extra money in the teenager's pockets they spent a lot of money on clothes, records, cosmetics and entertainment. Manufacturers had found a new market and there was an increase in advertising and manufacturing and popular culture in Britain was born. During the late fifties and the beginning of the sixties British pop stars often copied American artists and song such as Elvis who was copied by British singer Cliff Richard. These songs were mostly sentimental lyrics that parents could not disapprove of. ...read more.

This contributed a lot to the Beatles and Rolling stones success. The rolling stones were Rockers and they were very wild on stage. In 1967 the rolling stones released their single 'satisfaction', which was a song, which was controversial at that time because it suggested s****l satisfaction and that they were not catalysed by the way the government and society is treating young people. Also 'Brown sugar' was released, this was Very controversial because it openly suggested heroin use and mixed race s****l relationships. Mick jagger was the lead singer of rolling stones and his stage acts attracted a lot of attention. Such type of popular music had never been seen before in the 1960s. In conclusion the Beatles and Rolling Stones had such a great impact because of the baby boom, the economic boom, the controversy and the uniqueness of these bands. To some people the sixties were the best of times; to others it was a period when many things in society went wrong, why do people have such different ideas about the 1960s? During the 1950s to the 1960s there was many changes in society. Many dramatic events of the twentieth century happened in the sixties, such Yuri Gagarin was the first man in space, Cuban missile Crisis, and John F Kennedy's assassination. ...read more.

In conclusion whoever liked or disliked the sixties depended on their age, religion, gender and politics. It was a great time for young people because of their freedom and popular culture but bad for the older generation who were more traditional. Religious Christians believed that the pill and abortion and homosexuals was wrong and weakened society. For women, sixties was a time of great changes because now they could have equal pay, better jobs and education and a stronger legal position in marriage. Some husbands would have disliked this because they are not used to living without their wives looking after the house and family. For liberals sixties was good because of the abolition of death penalty and legalisation of gays. For people who belived in politics and trusted the government, they disliked the sixties because they do not like to see the politicians being attacked by the media. One of the main things of the sixties is that it was the beginning of when people began questioning society and lack respect for the establishment. The strong moral and family values of before had changed by the end of the 1960s into freedom, self-expression and the individual. ...read more.